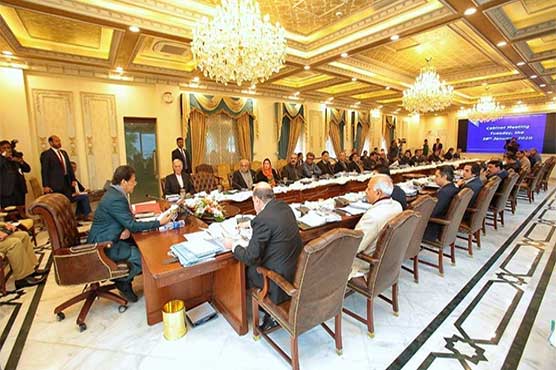 ISLAMABAD (Dunya News) – Meeting of the federal cabinet that was held in Islamabad on Tuesday with Prime Minister Imran Khan in the chair discussed overall political and economic situation of the country.

The transfer was postponed as federal cabinet handed over the matter to Governor Sindh Imran Ismail and Chief Minsiter Sindh Murad Ali Shah.

Later, briefing the media on cabinet meeting in Islamabad, Special Assistant to Prime Minister on Information and Broadcasting Dr. Firdous Ashiq Awan said at the outset of the meeting the Prime Minister vowed to take every step to provide relief to the people who are facing the brunt of inflation.

Imran Khan also directed Ministry of National Food Security and related organizations take all out measures for supply of edible items to people. The Prime Minister said action will be taken against those responsible for recent flour crisis in the light of recommendations of investigative report.

Speaking on the occasion, Federal Minister for Communications Murad Saeed said the federal cabinet has decided to recover money of undue public expenditures from former Nawaz Sharif and Asif Ali Zardari within a month. He said if they fail to submit the amount to government, legal action will be taken against them.

He said the previous governments burdened the country with huge debt as they plundered national wealth on their personal gains. He said a loan of 24,000 billion rupees was taken during the tenures of former Prime Minister Nawaz Sharif and ex-President Asif Ali Zardari.

He said national institutions were pledged to take loans. Murad Saeed said Sharif Brothers had established five camp offices apart from CM Office. The family installed barbed wire at a cost of 270 million rupees from national exchequer at their residence.