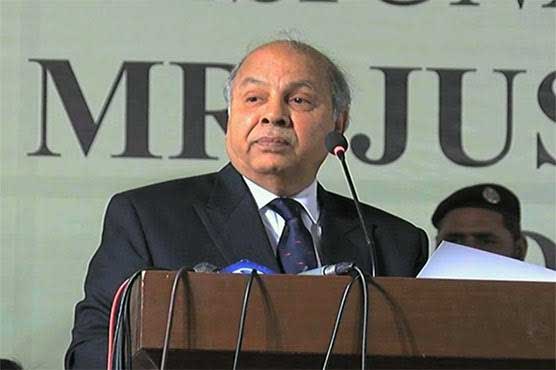 CJP said that benches and bars are working together to solve the issues of the public.

HYDERABAD (Dunya News) – The Chief Justice of Pakistan, Justice Gulzar Ahmed, on Saturday said that the provision of justice to the people is the most sacred work.

Addressing to an annual event of the Hyderbad District Bar, he expressed that they are playing an important role in ensuring the provision of justice. He said that the legal profession is a sacred work, and the court attends cases of the people as a pillar of the state. He added that the benches and bars are working together to solve the issues of the public.

CJP Ahmed went on to say that the work of law fraternity is not a favor to the people but their right. “Holy Quran is the most commendable book and it is the constitution of Pakistan”, he expressed, adding that the judiciary is serving for the justice.

He continued addressing that the efforts are being made to provide justice to every individual as per the Constitution. “The law protects education, health and needs of every citizen”, he asserted, adding that the people are not properly availing the service of law which is affecting the society.

CJP expressed that the courts are working to facilitate the people as it is the duty of a judge to hear the matters of the public.