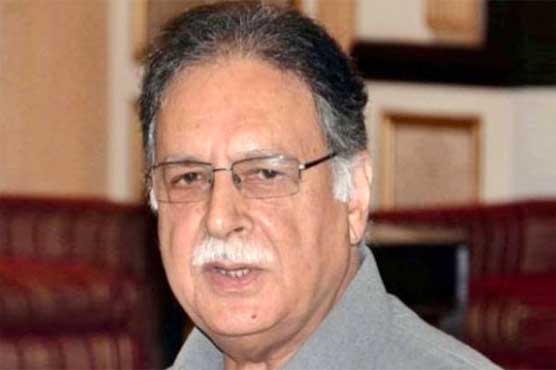 LAHORE (Dunya News) – Pakistan Muslim League-Nawaz (PML-N) Senator and former premier Nawaz Sharif’s close aide Pervaiz Rashid on Monday recorded his statement before the Federal Investigation Agency (FIA) that has been investigating into the purported videotape(s) in which accountability judge Arshad Malik had allegedly confessed to have convicted former prime minister Nawaz Sharif in the Al-Azizia Mills reference for seven-year imprisonment under pressure.

Citing strict security measures ahead of his appearance at FIA’s Lahore branch, the senator expressed surprise and asked “why so much security has been set up for him only?” “Are so many policemen deployed to conquer Kashmir?” he questioned ironically.

He talked to the media after recording his statement, and lashed out at the ruling PTI by stating that the government has become “a name of putting political opponents in jails.”

“The FIA is being used [as a tool] […] before me other partners were summoned,” he said, adding that the work was being taken from the FIA which doesn’t fall under its jurisdiction.

“That person who had used to say that he wouldn’t give a NRO, has now been giving a NRO to his friends,” he responded, while referring to an amendment made to the National Accountability (Amendment) Ordinance, 2019, promulgated by the Pakistan Tehreek-e-Insaf (PTI) government through a presidential ordinance on Friday.

Mr Rashid’s appearance before the FIA has followed PML-N deputy secretary general Attaullah Tarar’s quiz before the same investigation team on Dec. 27. Tarar affirmed that any evidence that could be helpful in proving the innocence of Nawaz Sharif should have been brought forth.

Earlier, an FIA team had raided the Model Town Secretariat – the central office of the PML-N in Lahore, and seized key records in connection with the judge video scandal.

The team had recorded statements of people who were present in the office, while some important videos were also seized. According to sources, the FIA team was fearful that some of the concerning record might have been hidden after summon of Tarar and Rashid.

In the raid, FIA had taken into custody hardware of a computer from the Central Office of PML-N in Model Town. “A FIA team raided at the central office of PML-N and took hardware of a computer from the office,” Mr Tarar had said. “The FIA team was holding warrant for raid at the party’s central office,” he had added, while pointing out that they had all the data in the IT room.

On Dec. 10 this year, Supreme Court of Pakistan (SCP) had wrapped up a review petition filed by former prime minister Nawaz Sharif seeking reconsideration of the Aug 23 order which had held that the video clip concerning former accountability court judge Arshad Malik would only benefit the petitioner if its genuineness was established.

It is pertinent to mention here that judge Arshad Malik had rejected all the allegations leveled by Maryam Nawaz regarding victimizing ex-prime minister Nawaz Sharif in fake corruption cases.

He had said that he was not pressurised by anyone to deliver verdict against Nawaz Sharif in Al-Azizia reference and that the decision was announced while fulfilling all the requirements of justice. I should have not acquitted Nawaz Sharif in one case and sentenced him in another case if I was under pressure, he had asserted.

In Dec. 2018, an accountability court had sentenced former prime minister Nawaz Sharif to seven-year rigorous imprisonment after it found him guilty in Al-Azizia reference, one of the three graft cases filed by the National Accountability Bureau (NAB) in line with the apex court order.

The Supreme Court on July 28, 2017, had disqualified Nawaz in Panama Papers case and ordered NAB to file separate cases which were respectively called Avenfiled, Al-Azizia and Flagship references.