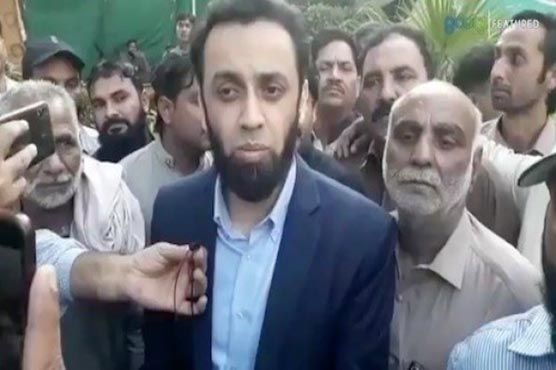 On the occasion, dozens of PML-N activists chanted slogans in the favor of party’s deputy secretary.

Earlier, FIA team had raided the Model Town central office of PML-N in Lahore and seized key records in connection with the judge video scandal.

“The FIA team was holding warrant for raid at the party’s central office,” he further said, adding that they had all the data in the IT room.

He also said that Prime Minister Imran Khan wanted to create unrest in the country by arresting all of them but they would not surrender and would continue their struggle against him.

Atta Ullah Tarar further termed the action as an enmity against the PML-N and asserted, "This is the very end of fascism and retaliation. We will fight vigorously against it." He added that the forensic analysis of original video is often denied.

On December 10, Supreme Court of Pakistan (SCP) had wrapped up a review petition filed by former prime minister Nawaz Sharif seeking reconsideration of the Aug 23 order which had held that the video clip concerning former accountability court judge Arshad Malik would only benefit the petitioner if its genuineness was established.

It is to be mentioned here that judge Arshad Malik had rejected all the allegations leveled by Maryam Nawaz regarding victimizing ex-prime minister Nawaz Sharif in fake corruption cases.

He said that he was not pressurized by anyone to deliver verdict against Nawaz Sharif in Al-Azizia reference and that the decision was announced while fulfilling all the requirements of justice. I should have not acquitted Nawaz Sharif in one case and sentenced him in another case if I was under pressure, he asserted.

In December 2018, an accountability court had sentenced former prime minister Nawaz Sharif to seven-year rigorous imprisonment after it found him guilty in Al-Azizia reference, one of the three graft cases filed by the National Accountability Bureau (NAB) in line with the apex court order.

The Supreme Court on July 28, 2017, had disqualified Nawaz in Panama Papers case and ordered NAB to file separate cases which were respectively called Avenfiled, Al-Azizia and Flagship references.