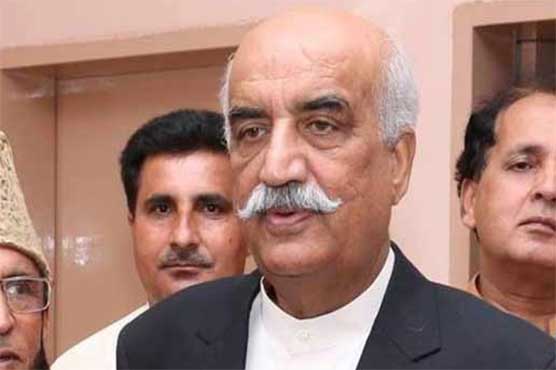 A NAB petition pleaded with the Sindh High Court to nullify the bail approved for the PPP leader.

KARACHI (Dunya News) – A district and sessions judge on Wednesday turned down a request made on behalf of Pakistan Peoples Party (PPP) senior politician Khurshid Shah for submission of his surety bonds for his release after Sukkur’s accountability court yesterday approved his bail application in the assets beyond means case.

The judge directed the Shah’s defense counsel to approach the accountability court tomorrow for this purpose when today the National Accountability Bureau (NAB) prosecutor told the court that Khurshid Shah’s bail approval has been challenged by the bureau with the Sindh High Court (SHC).

Earlier today, the NAB challenged the bail granted to the PPP leader in the assets beyond means case.

The petition filed with the SHC contended on behalf of NAB Chairman retired justice Javed Iqbal that the decision of Shah’s release on bail was against the Constitution. It further pleaded with the court to nullify the bail approved for the PPP leader.

On Dec. 10, the NAB decided to form a Joint Investigation Team (JIT) for investigation into the case against Shah.

The anti-graft watchdog had written a letter to the Federal Board of Revenue (FBR) Chairman Shabbar Zaidi, Federal Investigation Agency’s (FIA) Director General (DG) and Securities and Exchange Companies of Pakistan’s (SECP) chairman.

The anti-agency while asking the national institutions to provide the required expertise in the white collar crime said that the JIT probe was necessary before filing a reference against the PPP leader.

On Sept. 18, the NAB arrested senior the PPP leader in the same case. "NAB Sukkur arrested Syed Khurshid Shah in the assets beyond means case," a brief handwritten statement issued by NAB Islamabad had said.

In 2012, an accountability court had directed NAB to file a reference against him on a complaint pertaining to alleged accumulation of illegitimate assets.

Who is Khurshid Shah?

Born in 1952, Syed Khurshid Ahmed Shah hails from Sindh’s Sukkur region, which he went on to represent as an MPA and later as MNA. He studied at Sukkur’s Islamia College and obtained the degrees of MA and LLB.