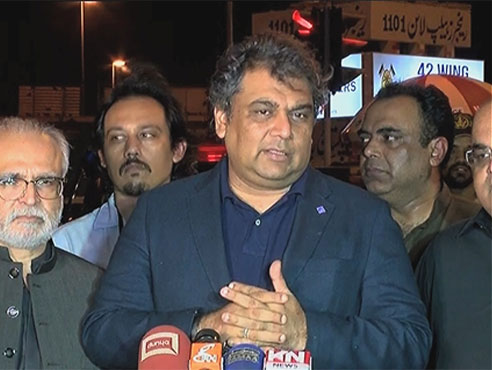 Ali Zaidi said that India is not interested in finding a solution of Kashmir dispute.

Talking to media on his return from United States, Ali Zaidi said that India is not interested in finding a solution of Kashmir dispute. He said that India does not know what to say on Trump s mediation offer.

He said that Prime Minister Imran Khan during his meeting with President Trump presented Pakistan stance on Kashmir issue in a befitting manner. Ali Zaidi termed US President s offer to become a mediator on Kashmir dispute as good news for peace and stability in the region.

He said that PM Imran and President Trump discussed various issues related to peace and stability in the region including Afghanistan. Ali Zaidi said that Prime Minister also supported the ongoing Afghan peace process during the meeting.

Taking a jibe at the Sindh government, Ali Zaidi said that Pakistan People s Party (PPP) is in power for the past 11 years in the province but problems faced by the people still remain unresolved.

Talking about Pakistan Tehreek-e-Insaf (PTI) Member National Assembly (MNA) and Fixit founder Alamgir Khan, who was briefly detained by Sindh police on Sunday, Ali Zaidi said that people like Alamgir are staging protests for the resolution of problems faced by the people of Karachi. He said that there is no need to stage a protest if the provincial government performs its duty properly.