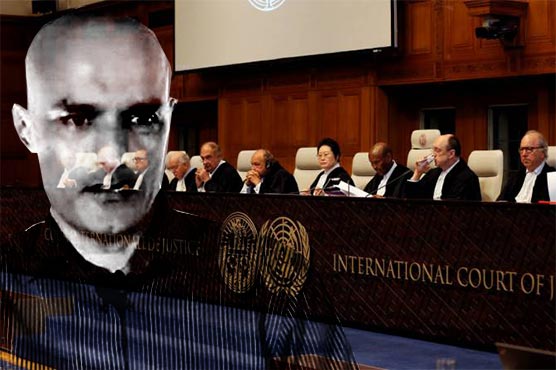 THE HAGUE (Dunya News/AFP) – The International Court of Justice (ICJ) on Wednesday rejected remedies sought by India, including annulment of military court decision convicting Kulbhushan Jadhav, his release and safe passage to India.

The international finds that Pakistan deprived India of the right to communicate with and have access to Kulbhushan Jadhav, to visit him in detention and to arrange for his legal representation, and thereby breached obligations incumbent upon it under Vienna Convention on Consular Relations.

The tribunal in The Hague ordered an "effective review and reconsideration of the conviction and sentence of Kulbhushan Sudhir Jadhav". The Indian navy officer was arrested in Pakistan’s province of Balochistan in March 2016.

The FO spokesperson talked to Dunya News and said Pakistan will accept the court ruling, and consultations will be made with lawyers regarding the procedure of implementation after the verdict. India could not present any evidence regarding Kulbhushan Yadav, he added.

Dr Muhammad Faisal further told that the complete schedule of Prime Minister Imran Khan’s visit to the United States will be issued soon. Good relations with Washington are in Pakistan’s interest and contracts which will be signed in the USA will benefit common people.

Government arrested him in the province of Balochistan on charges of terrorism and spying for India‘s intelligence agency, the Research and Analysis Wing (RAW).

On March 25 2016, The Inter-Services Public Relations (ISPR) released the confessional statement of Jadhav where he claimed to be a serving Indian Navy officer.

On April 8 2017, ISPR lodged a first information report (FIR) against him whereas on April 10 2017, Jadhav was sentenced to death by a Field General Court Martial in Pakistan. On May 8, 2017, India approached the ICJ against Pakistan for denying consular access to Jadhav.

On May 18 2017, the International Court of Justice (ICJ) stayed the execution pending the final judgment on the case and even on July 13, 2018, ICJ stayed Kulbhushan Jadhav’s execution in Pakistan.

On June 22 2017, Jadhav gave a second confessional statement where he confessed to carrying out subversive activities in Balochistan.

Earlier, Pakistan released a fact sheet just before the hearing of Kulbhushan Jadhav’s case at International Court of Justice (ICJ) in The Hague, Radio Pakistan reported.

Pakistan has presented evidence obtained from Commander Jadhav after his arrest, and during the criminal process leading to his conviction as amply demonstrating his activities in fomenting terrorism and engaging in espionage in Pakistan.

Pakistan will make its closing submissions on Thursday and it is expected that the ICJ decision will be delivered by the summer this year. The ICJ has repeatedly stated that it is not a Criminal Court of Appeal and effective review of a conviction is available before the domestic Courts.

Who is Kulbhushan Jadhav?

Pakistani security agencies on March 24, 2016 apprehended an ‘on-duty RAW agent’ from Balochistan. The suspect was said to be an officer of the Indian navy working for the covert agency to destabilize Pakistan.

The operative had contacts with banned organizations and was working on plans to break Karachi and Balochistan away from Pakistan, and to sabotage the billion dollar China-Pakistan Economic Corridor (CPEC) project.

On March 25, a day after the arrest, the Indian Ministry of External Affairs said the Indian man arrested from Balochistan has no connection with the government, however, admitted that Kulbhushan Yadav is a former officer of the Indian navy.

“He (Jadhav) acquired premature retirement from the Indian navy and since then the government has nothing to do with him,” Vikas Swarup, then spokesperson for the Ministry of External Affairs, had claimed.

He confessed before a Magistrate and the Court that he was tasked by RAW to plan, coordinate and organize espionage / sabotage activities aiming to destabilize and wage war against Pakistan by impeding the efforts of Law Enforcement Agencies for restoring peace in Balochistan and Karachi.