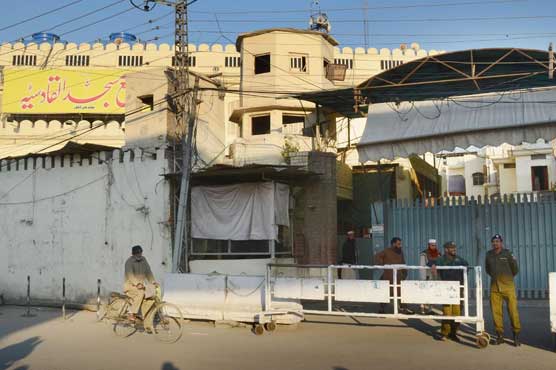 Govt is taking over control of Madrassas, hospitals and other facilities of banned organisations.

LAHORE (Dunya News) – Further implementing the National Action Plan, the Punjab government on Thursday took over the control of headquarters of the Jamaat-ud-Daawa (JuD).

According to a statement issued by the home department, NAP is being implemented in the province and the government is taking over control of Maddrassas, hospitals and other facilities of proscribed organisations and pace of action will accelerate.

On the other hand, Prime Minister’s Spokesperson Nadeem Afzal Chan said that PM Imran Khan had decided to take action against banned outfits under NAP.

“The decision was taken in today’s federal cabinet meeting,” he said.

On Wednesday, a day after a brother and son of Jaish-e-Mohammad (JeM) leader Masood Azhar among dozens of others were taken into ‘protective custody’ for investigation, the government had sealed or took over administrative control of scores of establishments run by the proscribed Jamaatud Dawa (JuD) and Falah-i-Insaniat Foundation (FIF) as well.

New khateebs and imams were appointed by the Auqaf department to replace the existing ones at the mosques and madaris being previously run by the JuD and FIF.

Following suit, the Sindh government took over control of 56 facilities run by the JuD and FIF, including schools, hospitals and madaris in different districts of Sindh.

Advisor to Chief Minister for Information Barrister Murtaza Wahab on Wednesday confirmed that the madaris and public welfare facilities being run by the proscribed outfits in Sindh province have been taken over by the provincial government. However, he clarified that the services at such schools, hospitals and madaris will continue for the general public under the administrative control of the government and that no person will be denied the services being provided through these institutions.