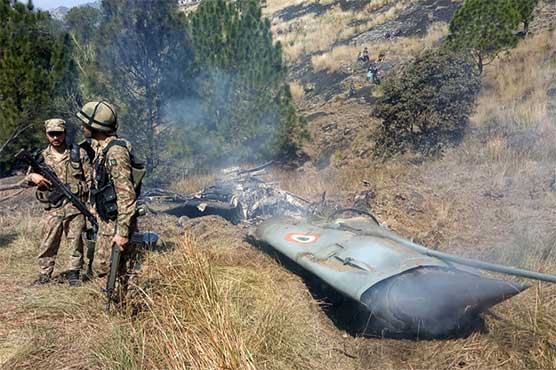 Two pilots have killed in the incident.

According to details, the wreckage of one aircraft fell in Central Kashmir’s Budgam while the other’s in Pakistan territory. Two of the pilots have been killed in the incident.

He said Pak armed forces have capability, will, resolve, people backing and all resources. But being a responsible state, we decided that we will not aim any military target. We also wanted to ensure that no human loss or collateral damage is done during our engaging the targets.

He said we selected six targets but we hit the areas close to them while keeping a safe distance, in order to demonstrate our capability. This action was purely in self-defense and with no aggressive designs.

The reaction came after Indian aircrafts intruded into Pakistan airspace and released payload in haste near Balakot. However, they scrambled back on PAF’s timely and effective response.

Following the violation, Pakistan decided to respond to India at its own choice of a time and a place.

The statement issued after the meeting read "Pakistan strongly rejected Indian claim of targeting an alleged terrorist camp near Balakot as well as the claim of heavy casualties. Once again Indian government has resorted to a self-serving, reckless and fictitious claim."

Foreign Minister Qureshi had also warned India of severe consequences, geopolitical ramifications and such moves could aggravate the already simmering tension between both countries.

DG ISPR Major General Asif Ghafoor said, “It’s you (India) who is sending war threats. We’re not preparing for a war but we have a right to respond to the war threats from your side.”

Tensions between Pakistan and India have been escalated since a suicide attack in occupied Kashmir killed 44 Central Reserve Police Force (CRPF) soldiers.

The attack saw explosives packed inside a van rip through buses in a convoy of 78 vehicles carrying some 2,500 members of the paramilitary CRPF.

On February 15, Indian government had blamed Pakistan for Pulwama attack and threatened to isolate it at international level.

Indian Prime Minister Narendra Modi said those behind the terror attack would pay a "very heavy price" and had made a "huge mistake".

Union Minister Arun Jaitley said they will take all possible diplomatic steps to ensure "complete isolation" of Pakistan and has withdrawn Most Favoured Nation status to the country.

Will retaliate against Indian aggression without thinking: PM Imran

On February 20, Imran Khan addressed the nation in a video message and said India alleged Pakistan without any evidence. The premier told India to leave its “judge, jury and execution” approach.

He said, “War is easy to start but difficult to end as it does not remain in human hands afterwards. It is not a sane approach to start a war.”

Imran Khan told India to leave its “judge, jury and execution” approach. “War is easy to start but difficult to end as it does not remain in human hands afterwards. It is not a sane approach to start a war,” he said.

He said Pakistan has no benefit in conducting such operations, especially when Islamabad was planning to sign historic deals with Saudi Arabia upon the visit of Crown Prince Mohammed bin Salman.

“Only a fool would do such a thing to sabotage the visit of the crown prince. Pakistan is going towards stability and fighting against terrorism,” he added.