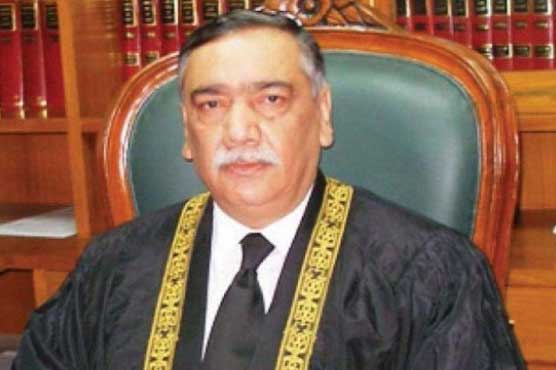 President Dr Arif Alvi signed the summary forwarded by the Ministry of Law appointing the honorable judge to the top slot.

Meanwhile, CJP Mian Saqib Nisar will retire from his services on January 17. 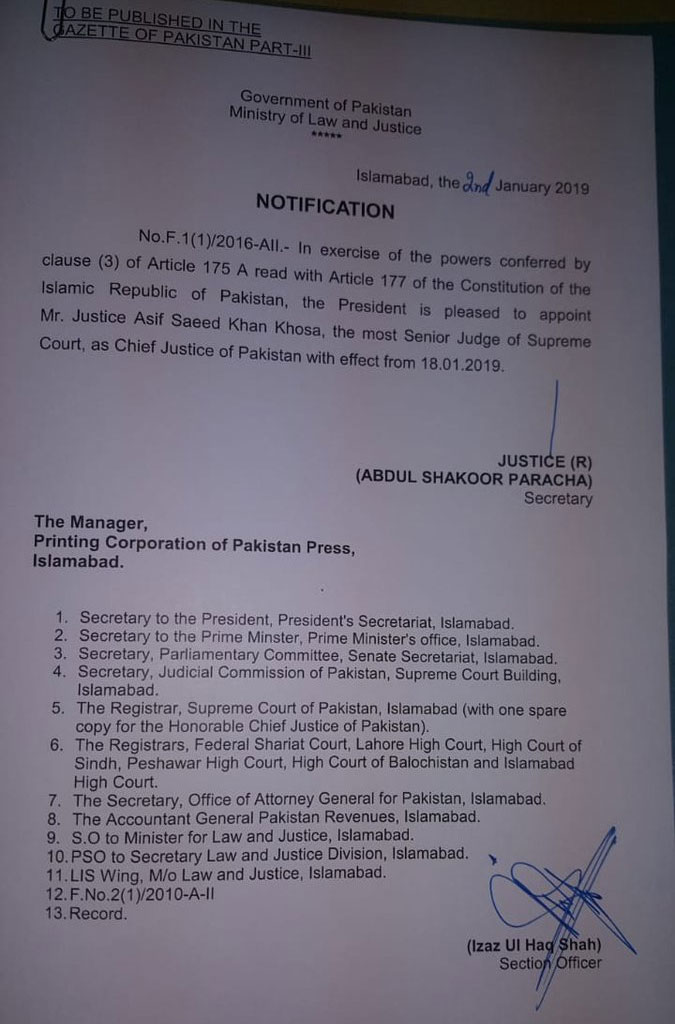 Asif Saeed Khan Khosa was on born December 21 1954 and has been a Senior Justice of the Supreme Court of Pakistan since 31 December 2016.

He was called to bar at the Honourable Society of Lincoln s Inn, London, Great Britain on 26 July 1979, one of the world’s most prestigious body of lawyers and judges.

He was born in the city of Dera Ghazi Khan in the South Punjab (region). He showed extraordinary interest and intellect in his education.

Justice Khosa passed his matriculation in 1969 from the Multan Board, securing fifth position. He was admitted to Government College University (Lahore) for intermediate and secured first position in the Lahore Board.

In 1973 he appeared for the BA exams from Government College Lahore at Punjab University and secured first position. He secured a National Scholarship Award. He did his masters in English Language and Literature at the University of the Punjab in 1975.

He was then admitted to Queens  College, Cambridge and did his Master of Laws with specialization in Public International Law. Later he was called to the Bar on 26 July 1979 at the Honorable Society of Lincoln s Inn, London.

Khosa was elevated to the Bench and appointed as Lahore High Court Judge in May 1998. When General Musharaf declared a state of emergency on 3 November 2007, suspending the constitution and demanded the judges of the superior judiciary retake their oath under the Provisional Constitutional Order (infamously called as PCO), Justice Khosa like Chief Justice Iftikhar Muhammad Chaudhry, and many other senior judges, refused to retake the oath. They were suspended from their duties.

On 18 August 2008 he was restored to his prior position as High Court Justice as a result of an unprecedented mass movement to restore the "deposed judges" launched by lawyers, political worker and civil society activists. He was among the larger bench of seven Supreme Court justices that was hearing Prime Minister Yousaf Raza Gillani s contempt of court case.

He was appointed as a Judge of the Supreme Court of Pakistan on February 18, 2010 and is serving in that capacity till date.

He also headed the larger bench of the Supreme Court that was hearing the "Panama Case" related to the alleged money laundering and off-shore illegal investment by former Prime Minister Nawaz Sharif and his family.