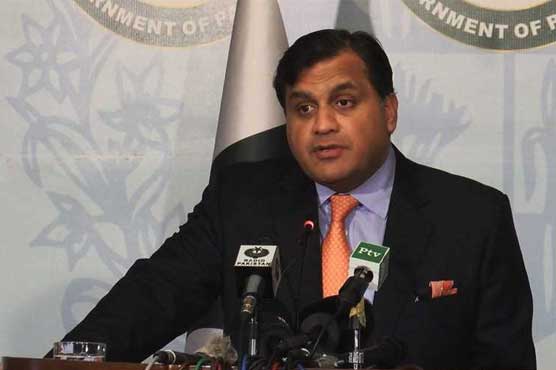 Pakistan will continue with its moral, diplomatic and political support to the people of Kashmir

ISLAMABAD (Dunya News) – Foreign Office Spokesperson Dr Muhammad Faisal on Thursday said that Pakistan strongly condemn the ongoing killing spree in Occupied Kashmir and called upon the international community to take notice of the situation and urge India to stop bloodshed in the held territory.

Addressing weekly news briefing in Islamabad on Thursday, he said that India cannot suppress the voice of innocent Kashmiris with power.

The spokesperson said that Pakistan will continue with its moral, diplomatic and political support to the people of Kashmir and their just right to self-determination.

Pakistan has also written letters to the Secretary Generals of the United Nations and OIC and a meeting of Contact Group on Kashmir will also be held soon, he said.

Dr Faisal said that India should allow the international institutions to probe brutalities on the innocent Kashmiri people in the Occupied Kashmir.

Responding to a question regarding Indian claims of ownership of Jinnah House in Mumbai, he clarified that Pakistan will not tolerate any such claim as India has already admitted Pakistan’s claim and has to honour it.

To a question regarding demolishing of two mosques in Allahabad, India, the spokesperson said that India should respect the rights of minorities living there.

The spokesperson said: “India continues with ceasefire violations on the Line of Control and Working Boundary to divert the world attention from its unabated atrocities over the innocent people in the held Valley.”

About the talks between Taliban and United States in United Arab Emirates, Dr Faisal said: “Pakistan has played its role as part of shared responsibility and reaffirmed its support for peace and stability in Afghanistan and our role has been widely appreciated.”