Will run an effective campaign to control population: PM Imran 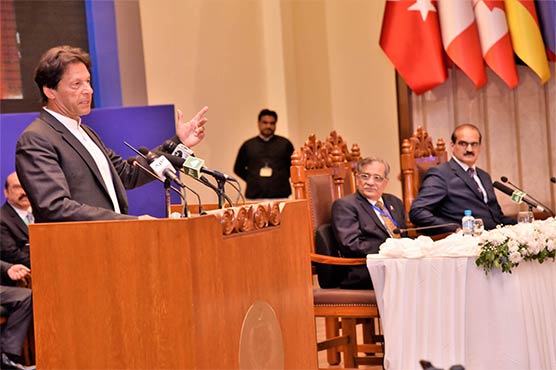 Will run an effective campaign to control population: PM Imran

Addressing a ceremony a one-day symposium to control population in Islamabad on Wednesday, he said that Chief Justice of Pakistan (CJP) Justice Mian Saqib Nisar laid foundation stone of  Naya Pakistan  through his verdicts in Panama Papers cases, adding that the CJP led the responsibility of democratic governments.

The prime minister said that democratic governments only think of a five-year term and this short-term thinking has led to chaos.

Khan said that the only that society progress which upholds supremacy of the law, adding that the institutions should work within their jurisdiction.

He went on to say that a society can progress only if rule of law is upheld in the country, adding that the basis of success of state of Madinah was rule of law. He said democracy and law complement each other.

Imran Khan said that visionary leaders think ahead of times and unfortunately the leadership in the last three decades did not vision or plan anything for development of the country. "Short term planning does not bear fruit, and only long term planning is a recipe to success," he said.

"In Naya Pakistan rule of law is being implemented," ﻿the premier said and referred to the case of CDA that despite being under to him asked questions about his property in Banigala. Six new legislations will be presented in the National Assembly soon to bring legal reforms, he added.

Imran Khan said that many investors have expressed their desire to invest in Pakistan due to enhanced confidence on policies of new government and improved governance structure.

He said that a strong political will is required to tackle the issue of mushrooming growth in population, adding that education and technology will be used to control population. All stakeholders, including Ulema, have to play role in this effort and mosques should spearhead this message, he added.

"A comprehensive campaign will be launched on population control in media to inform the people of the problems associated with rising population and also its impact on environment." He said everyone will be taken on board on this important national issue.