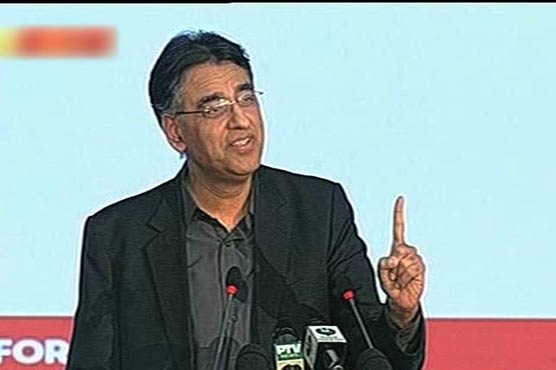 He said that the government would take U-turn for the betterment of the nation.

ISLAMABAD (Dunya News) – Finance Minister Asad Umer on Thursday said that the government has ascertained direction of country’s economy in first 100 days. Manifesto of Pakistan Tehreek-e-Insaf will be completed at all cost.

Addressing a ceremony regarding completion of Pakistan Tehreek-e-Insaf’s (PTI) first 100 days in government at the Convention Centre today, he said that all institutions were facing deficit when PTI came into power.

The minister said that PM Imran won the toss and opted to bat first in difficult situation and he was sent in to open bat when the ball was swinging.

“Pakistan’s budget deficit was Rs230 billion when PTI came into power which has already been reduced by Rs130 billion,” he added.

The minister went on to say that the government won’t hide behind the IMF, adding that the agreement with IMF will be signed considering national interests.

He said that the government would take U-turn for the betterment of the nation.

Umer said: “Country’s economy has been given direction during the first 100 days of the government.”

The minister revealed that it was upon his advice that the PM reneged on his promise to not travel abroad in the first 100 days.