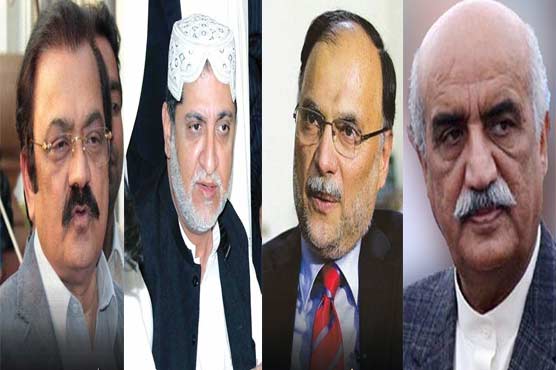 Khursheed Shah said the probe body will include 10 members each from the government and opposition.

ISLAMABAD (Dunya News) – Opposition parties have submitted eight names to the government for inclusion in the 20-member parliamentary committee tasked to probe rigging allegation in the 2018 general election.

The committee also includes Murtaza Javed Abbasi and Sardar Akhtar Jan Mengal. One member each from the Muttahida Qaumi Movement-Pakistan and JUI will also be included.

PPP leader Khursheed Shah said the probe body will include 10 members each from the government and opposition parties. Government will appoint the head of the committee, he added.

The government Tuesday decided to appoint defence minister Pervez Khattak as head of the committee tasked to investigate rigging allegations in the 2018 general election.

The parliamentary committee will include five members from the ruling Pakistan Tehreek-e-Insaf (PTI) and one member each from MQM-Pakistan, Grand Democratic Alliance, PML-Q, Balochistan Awami Party, and BNP-Mengal.