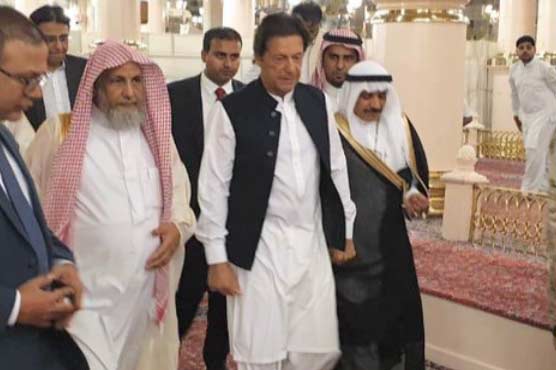 The doors of Roza-e-Rasool (SAW) were specially opened for the prime minister and his delegation.

Earlier, Prime Minister Imran Khan had arrived on a two-day visit to Saudi Arabia and United Arab Emirates where he will discuss important issues of bilateral interest and the regional situation with their respective leaders.

PM Khan will have an audience with King Salman and a bilateral meeting with the Crown Prince. The King will also host a State banquet for the premier at the Royal Court.

Organization of Islamic Cooperation (OIC) Secretary General Dr Yousef bin Ahmad Al-Othaimeen will also call on the PM Imran Khan. He will also pay his respects at the Roza-e-Rasool (PBUH) and perform Umrah.