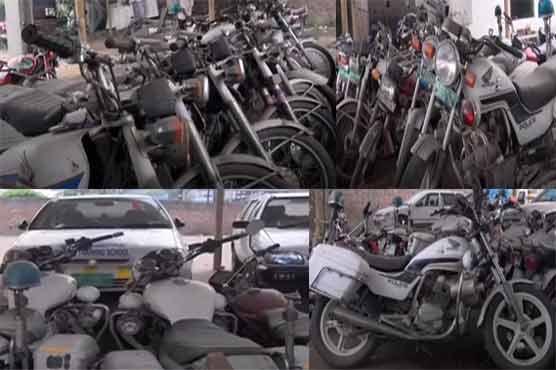 New vehicles leaving the old ones abandoned will not curb the crimes, police willpower is needed.

(Web Desk) – Police as usual are showing conventional negligence even when it comes to maintaining patrolling vehicles bought from the public money. Lack of maintenance, proper shelter, etc. are causing their obliteration. Almost everywhere in Pakistan, the garages are improper to park police vehicles at. Negligence has augmented to the extent that they seem deserted for years. One will find rusted police vehicles in large number in the police stations of Gujranwala. Some of the screenshots, taken from Raja Majid’s report from Gujranwala, of rusted vehicles which indeed are in need of someone owning them are below.

When asked by a citizen he said almost every type of vehicle, including bikes and cars, are out of order here. Another said policemen travel on private cars and I truly believe there is corruption behind. They (traffic police personnel) have been taking millions of rupees as fines, bought heavy bikes which used to be on roads, but now they are in garbage, a citizen went on to say.

Police officers, on the other side, are eyeing on the new government to feed them to make these vehicles useable. When asked by the police man, he said every car is getting out of order, we have written again and again, and we need new cars.

New cars are in fact not the mere solution to curb crimes. The vital things which are required at this moment are will and resolution and owning up public money as your own.The department of Police which is supposed to be effective and efficient when it comes to controlling crimes is lagging behind the modern and swift means of transportation and majorly because of its own sluggishness.

The police of every province show a dissimilar story. In KP, situation got better when it comes to providing convenience to the citizens for reporting the crimes, but wrongdoings are still in abundance. There are various means through which funds is generated by police but to what extent it is used is highly dubious. If it had been used at the right place, the situation might not have been like the one prevailing at this moment.

Actions from PM Imran Khan are yet to be made. Merit is yet to prevail. Crime is yet to be controlled. People’s confidence on police is yet to be restored. And most important of all resolve to perform national duties is yet to be produced among them. When will all of them happen, it will be worth pondering and praising.

Indeed rapid transformation in police is the need of hour. People still are afraid to go to police station for even reporting the crime. This is even the case of metropolitan cities like Karachi, Lahore, Gujranwala, etc. Imran Khan pledged to transform the police at the earliest when he comes to power.

In his tweet on #PoliceMartyrsDay he stated, “We are committed to strengthening the police force across all provinces, as we did in KP, by making it a merit-based, professional force free from pol interference.”

Actions from PM Imran Khan are yet to be made. Merit is yet to prevail. Crime is yet to be controlled. People’s confidence on police is yet to be restored. And most important of all resolve to perform national duties is yet to be produced among them. When will all of them happen, it will be worth pondering and praising. On the other side, Police Reform Commission under the leadership of Nasir Durrani is also a bold step and it is hoped this will bring positive change in Punjab Police which is supposed to be the guardian of more than 100 million people.