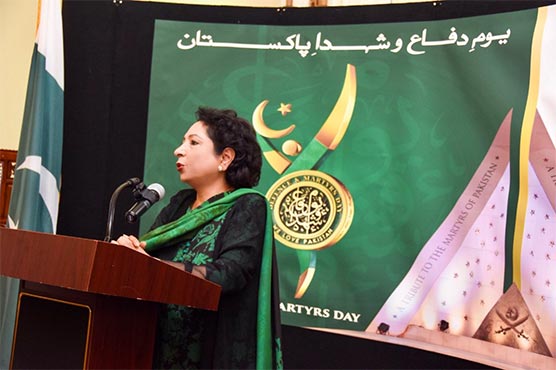 The ceremony at the flag-bedecked Pakistan House began with recitation from the Holy Quran.

NEW YORK (APP) - The Pakistan Mission to the United Nations on Thursday celebrated the 53rd anniversary of the country’s Defence and Martyrs Day with due solemnity and reverence.

At a simple but impressive ceremony, Pakistan’s Ambassador to the UN, Maleeha Lodhi, read out Prime Minister Imran Khan’s message marking the Day before a large gathering of Pakistanis living in and around New York who braved torrential rains to join in the tribute to the nation’s martyrs and heroes.

The ceremony at the flag-bedecked Pakistan House began with recitation from the Holy Quran.

In brief remarks, Ambassador Lodhi welcomed her compatriots, saying the Defence Day is commemorated to honour Pakistan’s valiant armed forces, who. she said, were capable of meeting any challenge to the country.

At our reception and photo exhibition in NY to commemorate Defence and Martyrs Day pic.twitter.com/uP9ZUg3V9A

The Pakistani envoy praised the brave defenders of the country, and said any nation that does not honour its heroes will not long endure.

She also paid tributes to the people of Pakistan who always stood behind their armed forces.

The Mission had also organized an impressive exhibition of photographs of Pakistan’s martyrs and heroes. The guests took keen interest in the photographs of men and women who made the ultimate sacrifice in defending the country.

From our photo exhibition that opened today at the Pakistan Mission to the UN to Mark Defence and Martyrs Day pic.twitter.com/nxKISYMg6t

Earlier, Col Umar Sharif, military adviser to the Pakistan Mission, said the purpose of Defence Day was to remember and pay tribute to the armed forces and people of Pakistan for their contributions and sacrifices in the defence of the motherland.

The function ended with ‘Dua’ for the martyrs.