Rizq: On a mission to end hunger 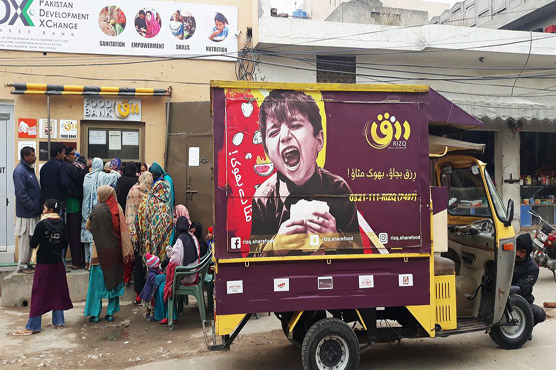 An idea inspired from a cafeteria discussion on food wastage has now turned into a sustainable food bank. Photo: Aroosa Shaukat

Food wastage is one of the biggest problems faced by the entire world. Globally, some 1.3 billion tons of food goes to waste every year. In the wake of such worrying figures, many countries have taken several initiatives to bring the excess wastage of food to a halt.

In Pakistan, concerns over daily wastage of food, cooked and raw, has forced people to work on initiatives addressing the issue. Whether it is the traditional form of offering meals through ‘dastarkhuwaan’ – where food is provided to the poor by laying out mats on roadsides in impoverished localities, or through programs aiming to educate people about food wastage, efforts are being made.

What started as an idea in a cafeteria at the Lahore University of Management Sciences has now turned into an initiative that aims to solve the problem of food wastage and hunger. 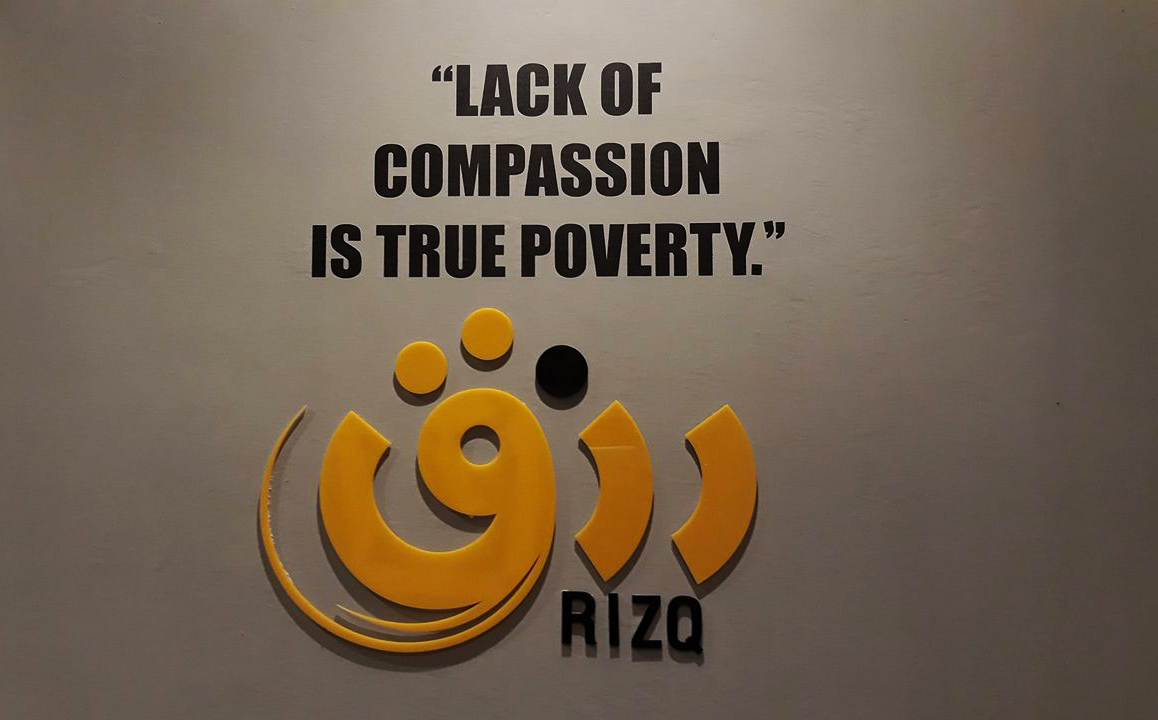 The initiative aims to solve the problem of food wastage and hunger. Photo: Aroosa Shaukat

Qasim Javaid, Musa Aamir and Huzaifa Ahmed were aware of how, on one hand, food is wasted on a daily basis in the country and how, on the other, many Pakistanis still remained under nourished.

“We wanted to do something to bridge that gap…and the manifestation of that realisation was in the form of Rizq,” said Qasim Javaid, one of the co-founders of Rizq, while speaking to dunyanews.tv.

Not knowing from where to get going, the group of friends made a Facebook page. “That’s where we received immense support which then encouraged us to get going and not look back.” 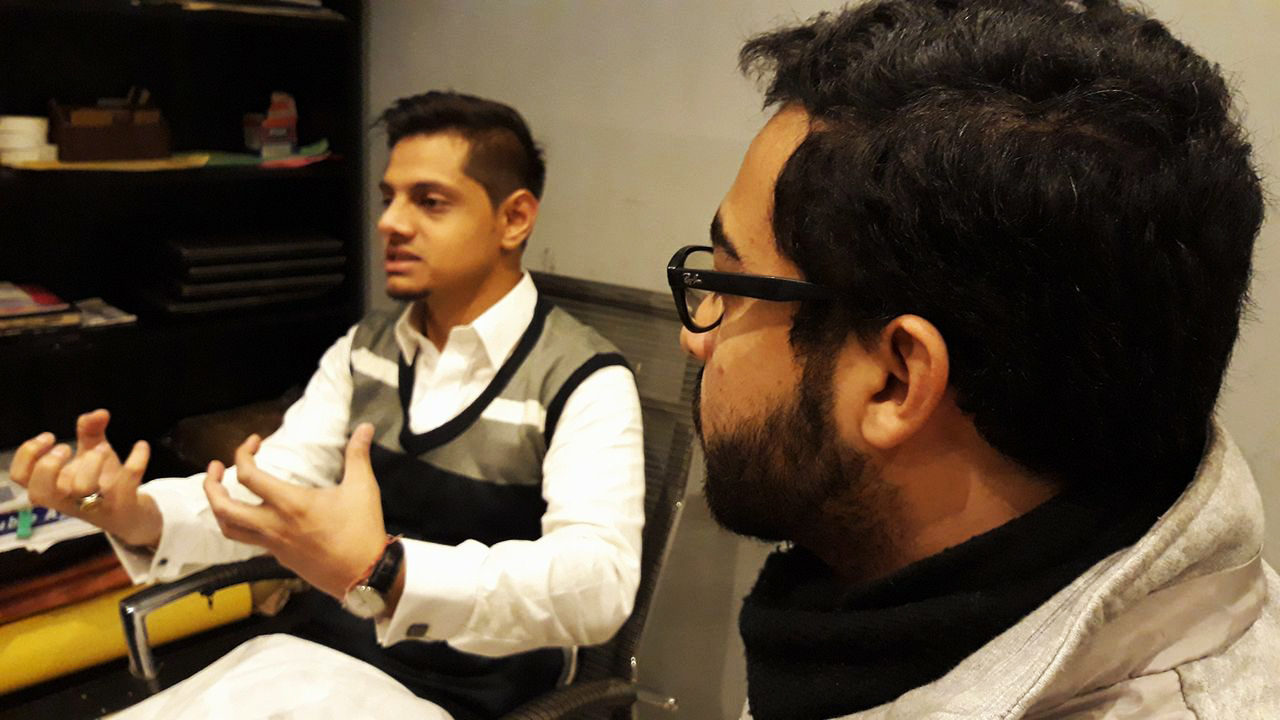 The friends were aware of how, on one hand, food is wasted on a daily basis in the country and how, on the other, many Pakistanis still remained under nourished. Photo: Aroosa Shaukat

But that was not all.

Javaid recalled that a co-founder’s mother was also the source of inspiration. She used to arrange the traditional ‘dastarkhuwaan’ offering food to those who could not afford to eat.

“Our friend’s mother became our mentor and we started working on how to build Rizq.”

However, later they realised that they needed something more concrete to make it more sustainable.

The team received mentoring on how to make their program more sustainable. Photo: Aroosa Shaukat

“We realised that this is not impactful and we need to dig down deeper to make it run on its own. We needed to make it sustainable,” said Javaid.

The team incubated in the Social Sciences lab of their university – LUMS, where they received mentoring and were trained on how to make their program more sustainable.

Later, they collaborated with PDX (Pakistan Development Exchange) in a bid to make their dream venture turn into a systematic function. Now Rizq operates under the umbrella of PDX.

Located in Sultan Park in Cavalry Ground, Lahore, Rizq provides food twice a day to families, identified with the help of a survey. They operate on a daily basis partnering with a few restaurants and bakeries from where they collect food.

There is a ‘Rizq-shaw’ that collects food twice a day from different restaurants and brings it to the distribution centre. 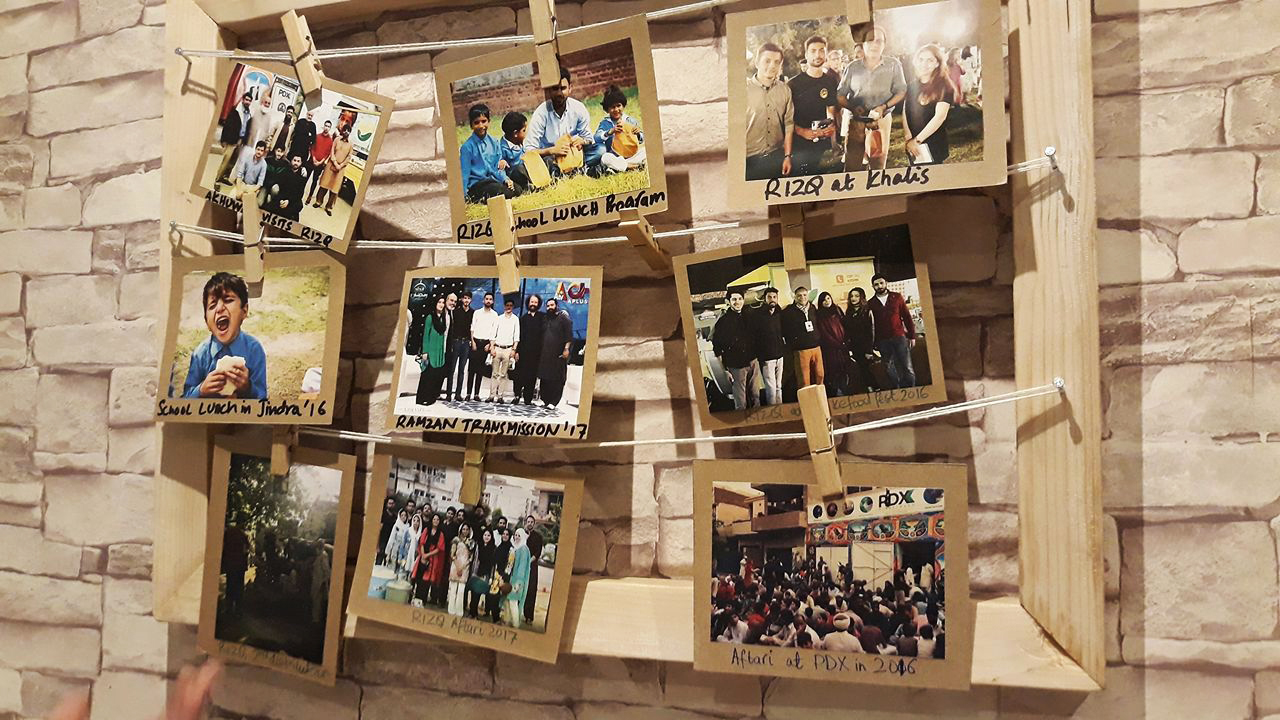 Rizq provides food twice a day to families, identified with the help of a survey of the area. Photo: Aroosa Shaukat

When Rizq started operating in the location, the initial challenge the team faced was how to build trust among the locals regarding the quality of food provided to them.

“In our office, this is a standard operating procedure that we all eat the same food that is brought from different sources to make sure what we preach, we also practice.”

The total number of families so far registered with Rizq is 250 to 300. Through a rigorous survey, they established that per family there are around five to six members that require food. 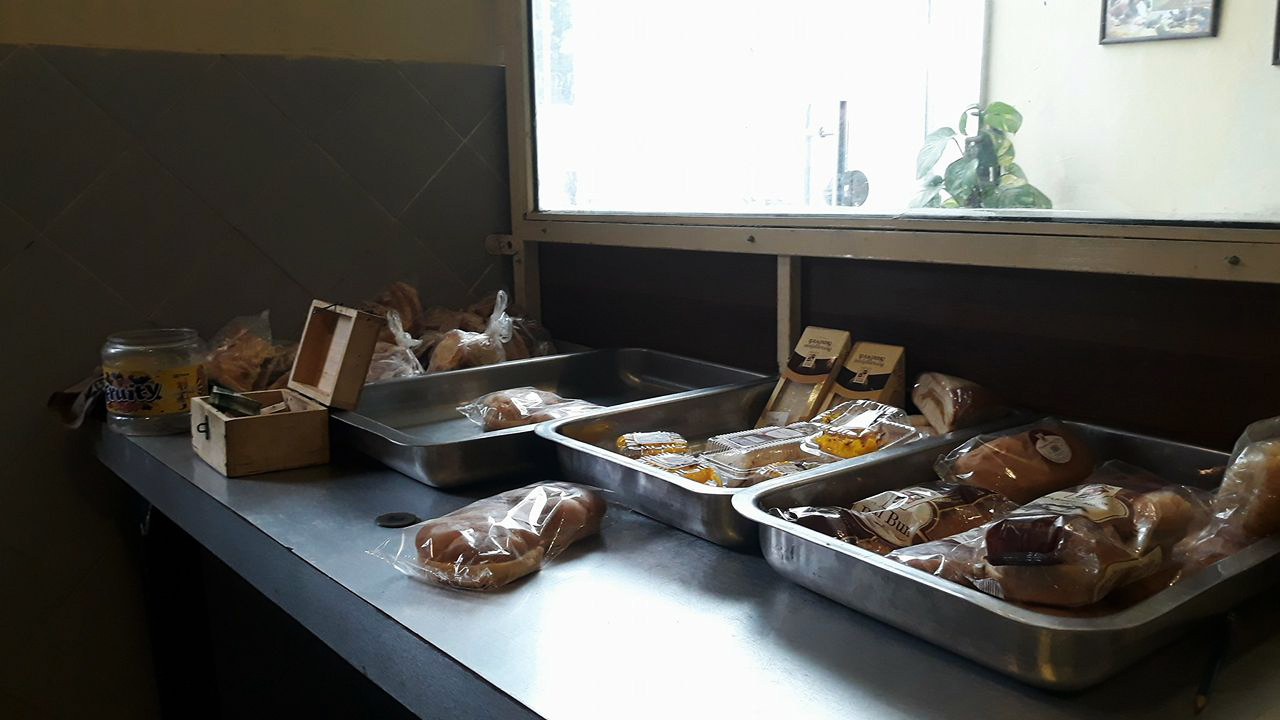 Rizq partners with a few restaurants and bakeries from where they collect food and distribute. Photo: Aroosa Shaukat

Verification officer, Amjad Ali, a resident of the community for the past 35 years, helped in the survey that identified families which were then registered with Rizq.

Following identification of families that needed food in the vicinity, cards were issued for the needy families using which they could purchase food from Rizq.

“The whole idea is to make these families food secure,” said Javaid.

The families then through their issued cards pay a small amount of money to buy food from Rizq at subsidised rates.

“It is a kind of a ration card, which they bring along at Rizq centre so that the food distribution is equal and honest.”

“The reason we take money from them is to respect their dignity,” said Javaid adding that this also helps make the operations sustainable.

Members at Rizq Centre manually enter data of their everyday distribution, recording information about everyone who comes and receives food.

Rizq plans to expand its operations in other locations in Lahore and other cities of Pakistan.

For this, they are working on an extensive survey in partnership with LUMS. The survey will look at how their pilot project has progressed so far, so that the team at Rizq can further replicate the same model across the country. 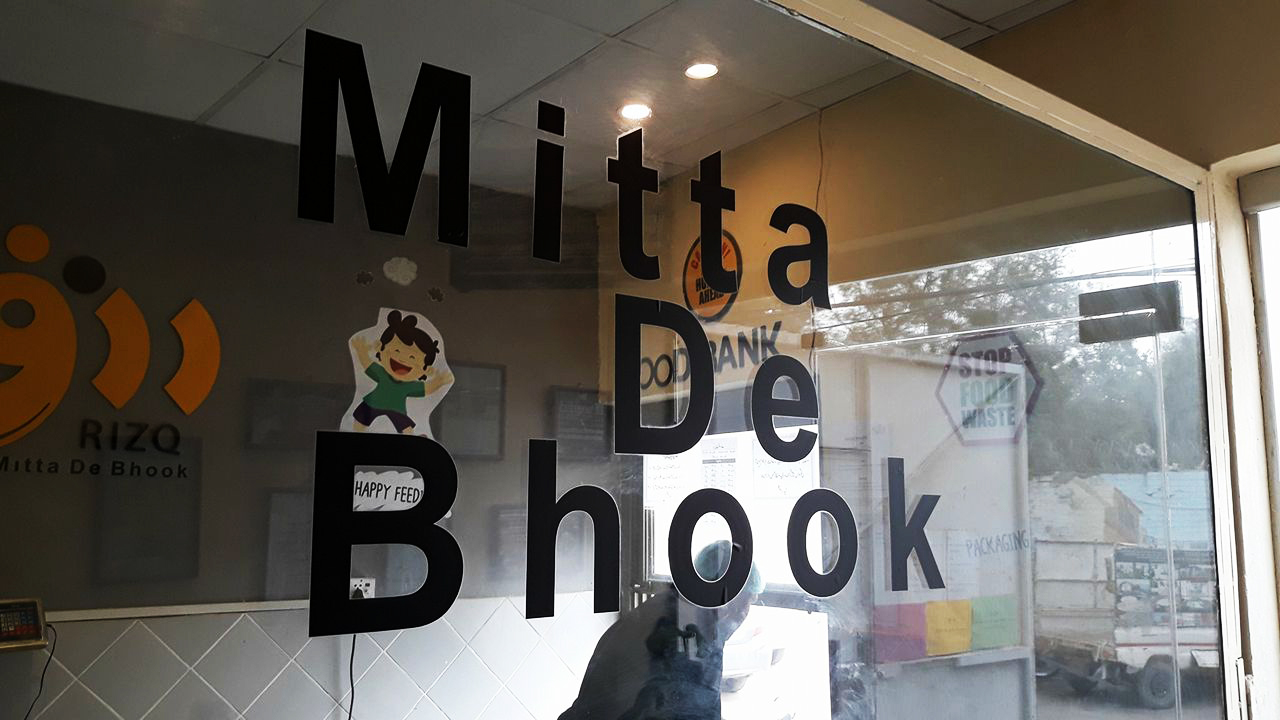 Rizq plans to expand its operations in other locations in Lahore and other cities of Pakistan. Photo: Aroosa Shaukat

“The 6-month assessment survey will help us evaluate the impact of what we are doing now and whether it is sustainable on its own or not,” Javaid said.

The team at Rizq also plans to go digital where they wish to provide smart cards, in hopes of ensuring easy access to their food bank.

For more on this, watch a report by dunyanews.tv below. 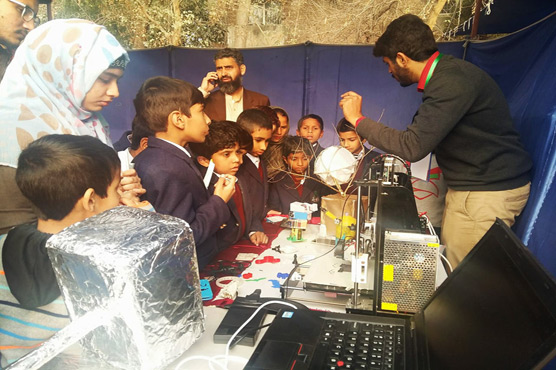 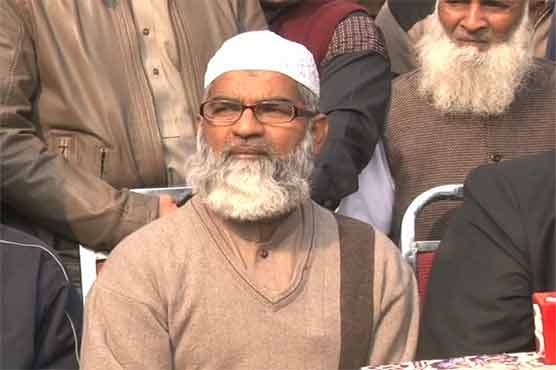 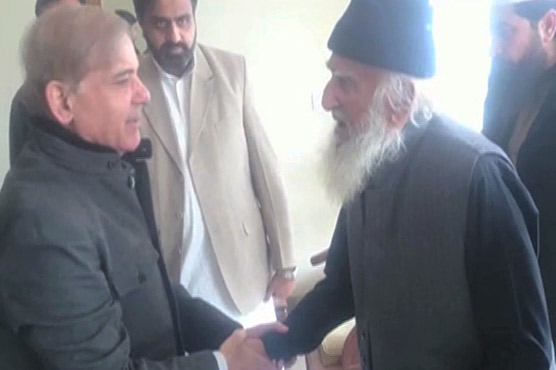 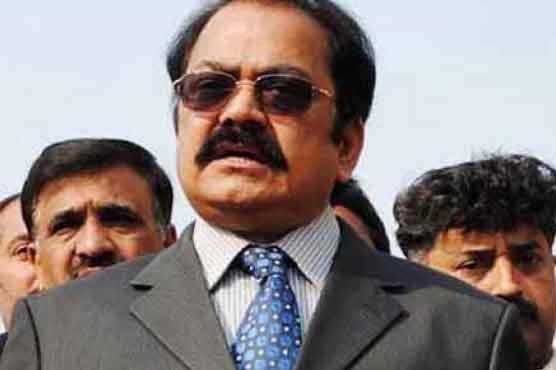