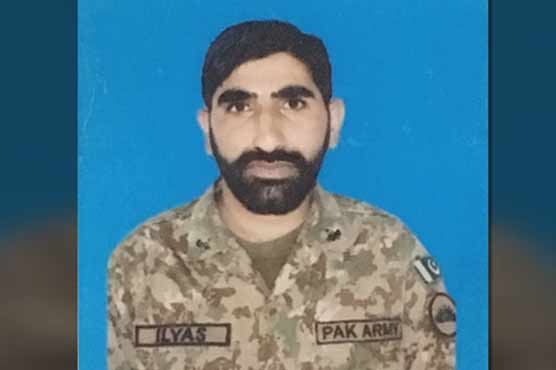 Sepoy Muhammad Ilyas embraced martyrdom after militants fired from across the border.

RAJGAL VALLEY (Dunya News) – A Pakistan soldier has on Thursday been martyred by the Afghan terrorists who attacked army check post in Rajgal Valley.

Sepoy Muhammad Ilyas embraced martyrdom after militants fired from across the border. Pakistan Army gave befitting reply to the terrorists which killed five and injured another four.

According to the Inter-Services Public Relations (ISPR), the reason behind terrorist attacks is lack of Afghanistan government’s control in many areas.

On the other hand, Director General ISPR Major General Asif Ghafoor said in his statement that attack on police in Quetta is condemned. He said Chief of Army Staff (COAS) General Qamar Javed Bajwa acknowledges the contributions of police and Law Enforcement Agencies (LEAs) for peace.

Attack on Police in Qta condemned. COAS acknowledges contributions of Police/ LEAs for peace. Sacrifices like DIG Hamid shall not go waste.