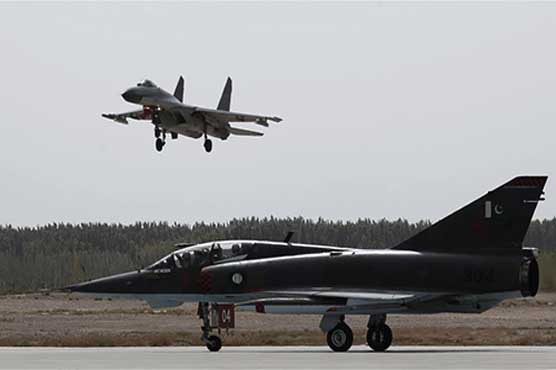 JF-17 Thunder, Mirage, F-7PG and ZDK aircraft from PAF along with PLA Air Force J-8, J-11, JH-7 and KJ-200 AWACS aircraft and ground forces including surface-to-air missile and radar troops are taking part in the exercise at Korla Air Base in China.

Responding to concern shown by some neighbouring countries, Chinese authorities have termed such actions unjustified as the joint exercise what it called was” a routine drill”.

During the exercise, the Chinese and Pakistani air forces demonstrated mutual trust by sitting in the same fighters.

In the ongoing joint drills, air force personnel cooperated in planning and implementing strategies, as well as learning operational concepts and tactics from each other.

The previous drills only provided experience of sitting in the same fighter instead of cooperating in fighting.

Li Wengang, Head of China-Pakistan joint training command office, said that sitting in the same aircraft to fight was a reflection of the deep mutual trust between the two countries and their militaries.

Chen Lei, a leader of a Chinese pilot team, said that the drill improved trainees’ skills and friendship, adding that individuals from both sides have become “buddies” after more than 10 days’ training.

“We need to learn from foreign armies and improve our capability to complete multiple tasks to build a world-class air force,” he added.

A senior military official at Pakistan Embassy remarked that the PAF – PLA Air Force joint exercise commenced in China on September 7, which is celebrated as Air Force Day in Pakistan to commemorate PAF successful air battle against Indian Air Forces in September 1965.

The exercise will further strengthen the working relationship between both the Air Forces and help in learning from each other experiences.

“Shaheen-VI,” is the sixth in the series of Joint Air Exercises with PLAAF, which is conducted each year in both countries on alternate basis.

PLAAF contingent participated in “Shaheen-V” which was conducted in Pakistan last year.