CPEC project: Jammers to be installed for Chinese workers' security 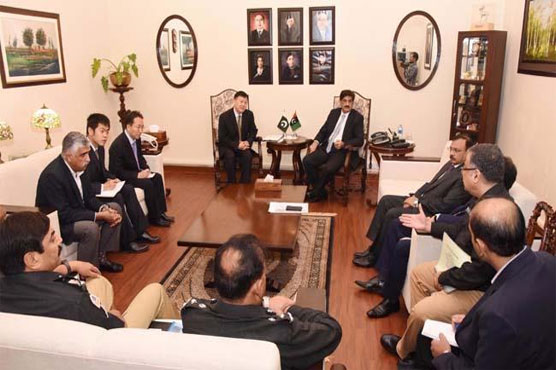 Sindh CM told that at least 3044 Chinese nationals are working on seven of the nine CPEC projects.

The decision was taken in a meeting chaired by Sindh Chief Minister Murad Ali Shah held over the security matter of the Chinese nationals. It was attended by Sindh home minister, Chinese Counsel General, Additional Inspector General of Karachi and others.

While talking to the meeting members, Sindh CM said that CPEC is a significant project for the country therefore; security is vital for the workforce involved in the project.

He directed the police department to provide special security to all Chinese nationals working on the project while installing jammers in their vehicles during movement.

Sindh CM told that at least 3044 Chinese nationals are working on seven of the nine CPEC projects.

On the proposal of Sindh Engro Coal Mining Company, Murad Ali Shah directed his principal secretary Sohail Rajpoot to held talks with Civil Aviation Authority regarding the completion of Islamkot airport on emergency basis so that the Chinese nationals could travel by air.

Additional IG Mushtaq Mehr said that while complying with Sindh CM’s orders, police has established a special protection unit for effective security response and to deal with any possible threats given to the Chinese workers.

There is possiblity of JIT members being targeted in future: Wajid Zia