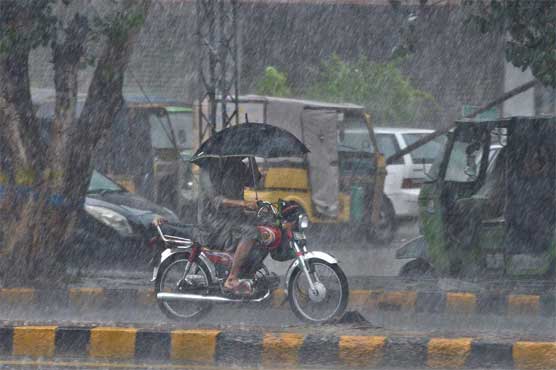 Following forecasts have been made by PMD:

In Punjab and Kashmir:

There will be heavy rain in a number of areas including Islamabad, Upper Punjab. Lahore, Faisalabad, Rawalpindi, Sargodha, Gujranwala and other cities will receive thundershowers. Kashmir regions will also witness rain from Monday to Thursday.

Rain/thunderstorm with isolated heavy falls expected at scattered places in KP, FATA and Gilgit-Baltistan during Tuesday to Thursday.

In Sindh and Balochistan:

Rain and thunderstorm with occur from moderate to heavy intensity. Scattered areas in Sindh as well as several cities of Balochistan including Zhob, Sibbi, Naseerabad and Kalat divisions will receive monsoon thundershowers during next weekend.

PMD has warned the authorities about rain water accumulation everywhere and landslide risks in the hilly areas. Met Office spokesman warned that heavy rains will cause urban flooding and flash flooding in the vulnerable areas particularly in Barsati Nullahs of Rawalpindi, Gujranwala, D.G.Khan divisions, KP and Kashmir. Due to intermittent rains, there is risk of landslides in hilly areas of upper KP, especially in Malakand and Hazara divisions, apart from GB and Kashmir regions during next week.