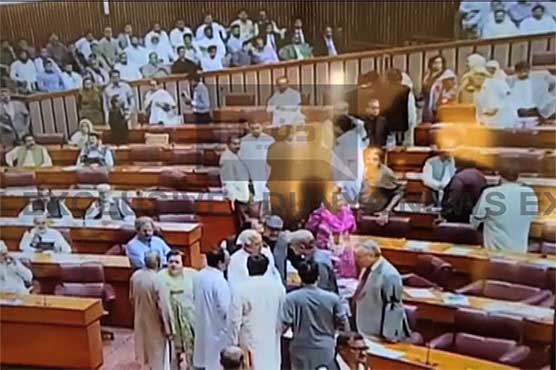 Leader of the Opposition in NA, Khurshid Shah criticised the government for resorting to the use of force against protesting farmers terming dictators and the leadership of Pakistan Muslim League-Nawaz (PML-N) no different.

Know more: Protesting farmers clash with police in Islamabad ahead of budget announcement

Members of the opposition tore copies of the federal budget and chanted ‘liar, liar’ as Dar claimed in his speech that power outages would be put an end to in 2018.

Opposition members, supporting black ribbons on their arms, circled Speaker of the NA, Ayaz Sadiq’s dais to protest against the federal government. The opposition walked out of the assembly for a brief period of time and returned to their benches.

Opposition Leader demanded off the NA Speaker to permit him to address the participants before Dar laid out details of the budget however, Ayaz Sadiq denied.

Senator Ishaq Dar informed the NA Speaker that he had discussed the issue with the Prime Minister (PM) beforehand and members of the ruling party did not have an objection if Shah was permitted to speak.

Following which, Khurshid Shah was permitted to speak for a brief period of time to have his protest against government’s alleged unjust rule recorded on the floor of the House.

Highlights of the budget for fiscal year 2017-18