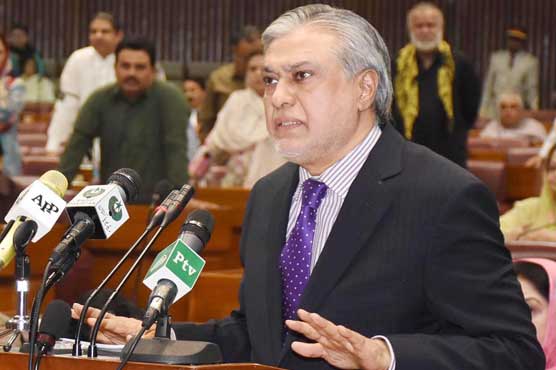 ISLAMABAD (Dunya News) - Finance Minister Ishaq Dar, during his Budget 2017-18 speech on Friday, announced a salary raise for government employees in the country. A 10pc raise in the salaries has been given to the people working in government sector.

According to details, ad-hoc reliefs added in 2009-10 will be incorporated into the salaries. A 10% special allowance will also be provided in the salaries of Pakistan Army soldiers.

(10) For employees of Pakistan Post, certain rates of allowances revised

(11) The salary structure of Jawans of the Frontier Constabulary made attractive by giving Rs. 8,000 per month fixed allowance.

Let us take a look at the previous trends of relief for federal government employees in annual budgets.

Last year, 10% ad hoc relief allowance on running basic pay was allowed to all federal government employees. Special Conveyance Allowance of Rs 1000/month was given to disabled employees and Rs 300 per month for civil armed forces, posted in border areas. 10% increase was recommended in net pension of all pensioners of federal government, while 25% increase in net pension was given to pensioners above the age of 85 years. An increase of Rs 57 billion was estimated for pay and pensions relief.

Relief for govt employees in Budget 2016 can be summed up as:

3) Special Area Compensatory Allowance at the uniform rate of Rs 300 per month from Rs 50- 210 for civil armed forces, posted in border areas.

6) Revision of Outfit Allowance was given to Pakistan Army officers on their secondment to civil armed forces and reversion to army from Rs 800 to Rs 2500 and from Rs 500 to Rs 2000, respectively.

7.5% ad hoc relief allowance was given on running basic pay of all federal government employees. 7.5% increase in net pension of all pensioners was announced, with 25% increase in medical allowances of pensioners.

The salient features of relief for federal govt employees in Budget 2015 were:

2) Medical allowances of all government employees were enhanced by 25%

3) A premature increment was given to employees of grade 5.

5) The rate of orderly allowance and special additional pension was increased to Rs 12,000 per month.

7) A 7.5% increase in net pension was announced for the pension of the retired government servants.

8) Medical allowances of pensioners were enhanced by 25%.

9) Upper limit of investment in Bahbood Saving Scheme of National Savings by the pensioners and senior citizens was enhanced from Rs 3 million to Rs 4 million.

The salient features of Budget 2014 with regard to relief for government employees was:

(b) 20% increase allowed for govt employees in Grade-1 to 15 drawing fixed medical allowance of Rs.1000 per month.

(c) 5% increase given in conveyance allowance to those employees working in Grade-1 to 15.

(d) The post of superintendent was upgraded from Grade-16 to Grade-17.

(e) One pre-mature increment was allowed to employees of Grade-1 to 4.

An additional relief was given to low pensioners, whose minimum pension was increased from Rs 3000 to Rs 5000.

It was stated in the Budget 2012 speech PPP government always made an effort to ensure that government servants do not face acute hardships on account of low public sector salaries vis-à-vis the private sector.

"To ensure that the government acquires and retains competent civil servants who can serve the citizens of Pakistan with peace of mind, our government has increased pay by more than 100% during the last four years," it said.

Five successive increase in pay and pension were given by the PPP-led coalition government.

As a huge salary raise was given to federal government employees in Budget 2010, an ad hoc monthly allowance equal to 50% of basic pay, lower relief was given in Budget 2011 due to tight financial position.

Existing Conveyance Allowance was increased by 25% to all the employees in BPS 1-15 and their equivalent in the Armed Forces. 15% increase in pay of all government employees and the personnel of armed forces was announced.

All the ad-hoc relief allowances granted up to 01.07.2009 were merged in the Basic Pay Scales-2008 to introduce the new pay scales.

Moreover, it was noted that the salary structure of the government was distorted. An attempt was made to establish an independent commission to examine the structure of pay and allowances across the public services to bring equity and fairness across them.

PPP-led coalition provided 15% ad hoc relief allowance which was regulated on July 1, 2009, along with increasing allowances of armed forces to make it equal to one month’s initial basic pay. Also, an adhoc relief allowance of 15% of pay was allowed in the interim period which was withdrawn on December 31, 2009.

The story was compiled by Umair Sohail.