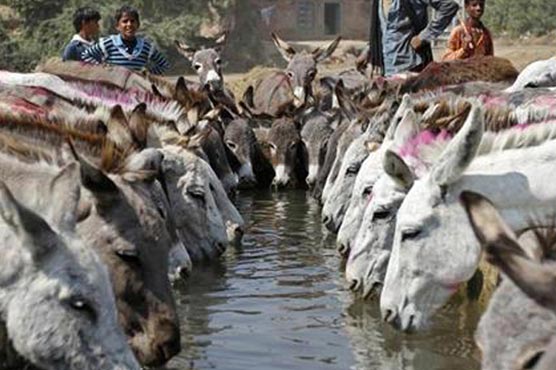 Experts are worried that Chinese demand might wipe out species.

Web desk - Last month, it came to light that the Khyber Pakhtunkhwa government is planning to sell donkeys to China as a part of its Rs 1 billion Khyber Pakhtunkhwa-China Sustainable Donkey Development Programme. The intent of the programme is to bring in Chinese investment into the agriculture sector of the province.

According to cpec.kp.gov.pk, the programme would help develop the socio-economic status of those communities which reared donkeys for a living. This would be achieved by improving the health and production of donkeys to ensure a regular supply of donkeys to China that would also result in an increase in the income of donkey breeders and traders.

A report published in TRT World, the international arm of the Turkish national broadcaster, the sale of donkeys and the illegal trade associated with it has had an adverse effect on the donkey population in countries like Kenya and South Africa. As a result of this scenario, some African countries have even banned donkey trading due to declining numbers.

China is one of the world’s biggest consumers of donkeys. Although donkey skins have no value in the African countries who sell them, they are highly sought after in China. Donkey skins are used in China in the production of traditional medicines. A gelatin present in donkey hides is used in making medicines that are believed to cure diseases like blood deficiency. Moreover, donkey meat is also believed to be more nutritious than other meats.

In the past, only the rich had the luxury of taking advantage of these medicines made from donkey hides, but a burgeoning middle class in China has fueled the demand for donkeys. According to TRT World, 120 tonnes of donkey meat are exported from an average Kenyan donkey farm to China. This trade has spelled disaster for the donkey population.

The news report also cited numbers and figures given by a UK-based charity The Donkey Sanctuary, which said that the global demand for donkeys is 10 million animals per year, with a supply of just 1.8 million. This makes the trade highly unfeasible and unsustainable, leading to a dwindling donkey population.

Considering these facts and the current scenario in African countries which are involved in the sale of donkeys to China, Pakistan should rethink its plans to pursue this programme. In case this programme is not properly implemented, or Pakistan is unable to sustain a supply sufficient for the Chinese demand, the result would be a falling donkey population that is highly unfavourable. The most important reason for this is the fact that donkeys are greatly valuable to the poor in the country. They provide a cheap form of transport for people and goods, and are an integral part of the struggle by poor people to make a living. Moreover, donkeys are also of great value as a mode of transportation to traverse Khyber Pakhtunkhwa’s mountainous terrains. Donkey trade might thus prove to be detrimental not only to the species itself, but also to those who regularly use donkeys as a means to transport themselves or their goods.