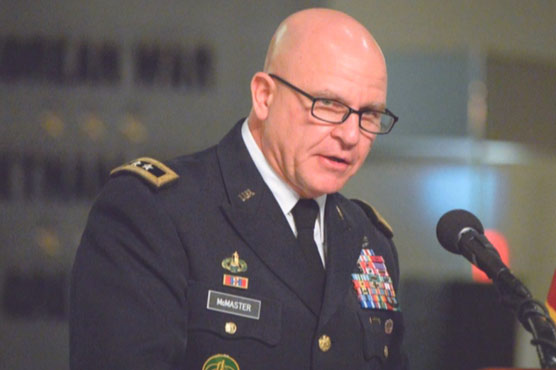 ISLAMABAD (AFP) - US National Security Advisor Lieutenant-General H.R. McMaster arrived in Pakistan on Monday that came as the first visit of any top official from Trump s administration.

He visited Afghanistan before landing in Islamabad.

A statement by Prime Minister Nawaz Sharif’s office said McMaster had "assured the Prime Minister that the new administration was committed to strengthening bilateral relations and working with Pakistan, to achieve peace and stability in Afghanistan and in the wider South Asian region."

McMaster’s visits are being closely watched for clues to the Trump administration’s future course of action in the region.

US-led NATO troops have been at war in Afghanistan since 2001, after the ousting of the Taliban regime for refusing to hand over Osama bin Laden following the 9/11 attacks in the United States.

The US has around 8,400 troops in the country with about another 5,000 from NATO allies, as efforts to negotiate a lasting peace settlement between Kabul and the Taliban have repeatedly fallen through.

A statement added that McMaster’s delegation included Lisa Curtis, whom US media have previously reported as his pick as senior director for South and Central Asia.

Curtis recently co-authored a paper highlighting her recommendations for US-Pak terms in the future.

The US embassy said McMaster also met Pakistan’s army chief General Qamar Javed Bajwa and other officials and described the meetings with Pakistani leaders as productive.

"General McMaster expressed appreciation for Pakistan’s democratic and economic development, and stressed the need to confront terrorism in all its forms," it said in a statement.

Last Thursday the US military in Afghanistan dropped its largest non-nuclear bomb in combat for the first time anywhere. The target was a Islamic State group hideout and officials said up to 95 militants were killed.

In the Trump era, one U.S. Muslim investor tries a louder voice

Trump's U.N. envoy says ouster of al-Assad is a priority of U.S.