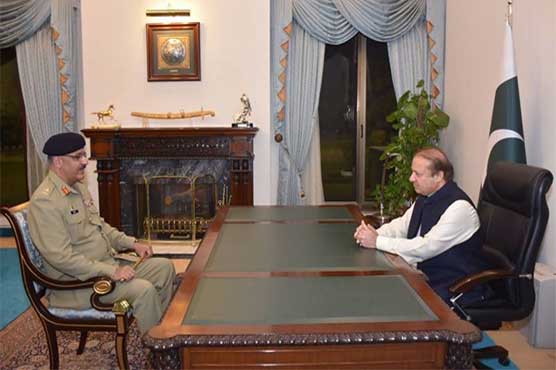 It was agreed during the meeting that Lahore terror attack cannot deter the resolve of nation to eliminate terror from Pakistan. Armed officers are full committed to cleanse the country from extremist terror with the help of civilian security agencies.

Homage was paid to fallen heroes of police in Lahore. Armed forces development programme and strategic matters were also discussed during the meeting.

The premier stated that war on terror will be taken to its logical end. Army and other military and civil law enforcement agencies have given matchless sacrifices to achieve great success in this war.

No one should think that we will stumble in this struggle due to such terror attacks. Our enemies will be defeated by our national resolve. To wipe out terrorism is our national duty, stated the PM.

“Neither I nor this nation will forget the sacrifices of our valiant Police officers and officials. This is a war of right and wrong and we as a nation are on the right side of history in this war. We will soon see the end of this cancerous terrorism and it s Ideology. Swift, ruthless and successful response is the only option for us,” stated the Prime Minister.

Nawaz Sharif was briefed by Additional IG CTD Rai Tahir . PM was told that CCTV footage has helped in speeding up the investigations. CTD chief told the meeting that 12 terrorists plans were disrupted in year 2016. 231 terrorists have been killed by CTD Punjab. 769 terrorists have been arrested. He was further informed that Counter terror Department and Punjab Police with the support of the government will take revenge from these terrorists as soon as possible.

Will do everything to arrange PSL final in Lahore: Army chief