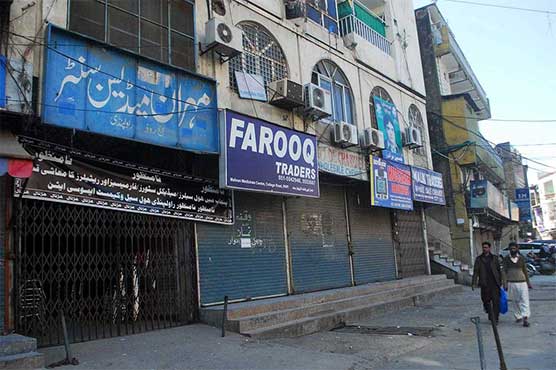 The citizens have demanded local management to take legal action against the store owners.

RAWALPINDI (Dunya News) – Pharmacists’ strike against amendments in drug act is continuing for third day in Punjab and other parts of country including Rawalpindi which is creating a lot of difficulties for the patients.

As per details, medical stores in Mall Road, Bohar Bazaar, Murree Road, Fawara Chowk and other areas of Rawalpindi remained closed for the third day. Moreover, protest camps are being held at Mall Road and Bohar Bazaar, and the protesters claim strike will continue until the amendments in drug act are taken back.

District administration is also doing nothing to end the miseries of patients as they continue to suffer due to lack of medicines. The citizens have demanded local management to take legal action against the store owners.

On the contrary, the pharmacists have claimed that medicine supply is not interrupted in any private or government hospital of Rawalpindi, and stock is available for emergency cases.

The pharmacists do not want to be accountable for their illegal conducts and continue to trouble patients. People without any qualification and license have become chemists and are playing with the lives of people by not only selling medicines, but also by diagnosing diseases and treating patients themselves.

The staff at their stores is uneducated and cannot even read the prescriptions written by doctors correctly. It has been reported that more than 70 percent of the medical stores do not qualify for the required standards. Their only purpose is to earn money, as they do not care about the lives of people.

Bahawalnagar: Six killed after house collapsed due to cylinder blast