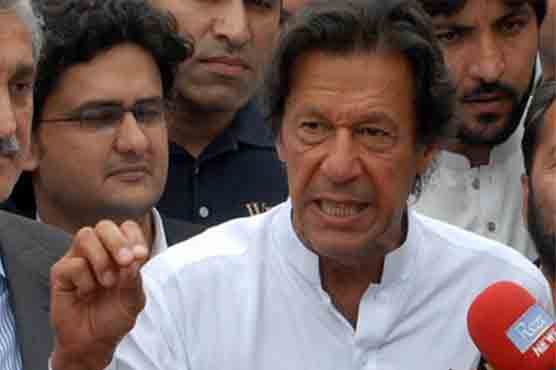 While talking to media, he argued that if Rangers operation can be successfully carried out in Karachi then why not in Punjab. Are terrorists nurtured here?

He slammed the government, especially the provincial government by claiming that the rulers have politicized the institution of police while sitting in Raiwind. “The Lahore blast could be a conspiracy against Pakistan Super League (PSL)”, he added.

Imran Khan stated, “Eradicating terrorism should not be let alone to Pakistan Army and Rangers. If Rangers operation can be carried out in Karachi then why not in Punjab. Are terrorists nurtured here?

“Shehbaz Sharif had given a message to terrorists a few years back not to attack Punjab. Hamza Shehbaz appoints police SHO’s in the province. Government is politicizing police while sitting in Raiwind”, he accused.

PTI chief suggested that for improvement, we have to depoliticize and neutralize police. He said that the Lahore blast at Charing Cross of Mall Road could be a conspiracy against PSL.

While saying that the report by Justice Qazi Esa should be focused, he asked that if all parties have agreed to National Action Plan (NAP) then why it is not completely implemented yet.

Will do everything to arrange PSL final in Lahore: Army chief