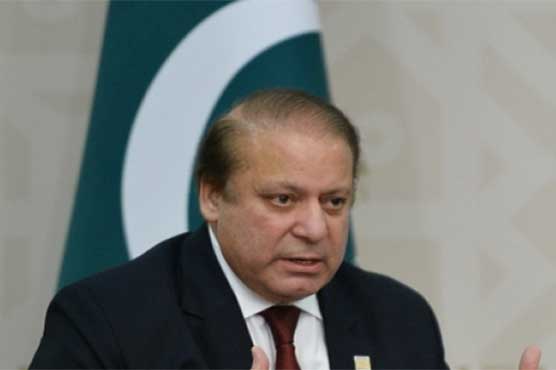 ISLAMABAD (Dunya News) - Prime Minister Nawaz Sharif on Wednesday felicitated President-elect of the United States (US) Donald J. Trump on his historic victory in the 2016 US Presidential elections.

The Prime Minister, in his message, stated that Donald J. Trump’s election is indeed the triumph of the American people and their enduring faith in the ideals of democracy, freedom, human rights, and free enterprise, the Radio Pakistan reported.

The premier said Pakistan and the United States have enjoyed a strategic partnership, rooted in the shared ideals of freedom, democracy, mutual respect, and commonality of interests.

Nawaz Sharif said a strong partnership between the two countries remains critical to promoting and sustaining peace, security and stability in the wider region, continue to underpin the resilience in Pak-US ties.

The Prime Minister wished to closely working with the new leadership of the United States to bring the two countries closer and making bilateral partnership an important vehicle for the realization of peace, security and prosperity in the region and beyond.

Meanwhile, Punjab Chief Minister Shehbaz Sharif posted a message on Twitter, expressing hope that it will be good for the world if Trump speaks through his actions.

America has spoken and elected Mr Donald Trump as next president... I hope when he speaks through his actions it ll be for global good ...

Earlier in his address after the election victory, Donald Trump pledged to every citizen of the United States that he will be president for all Americans,

It may be mentioned here that during a bitter two-year campaign that tugged at America’s democratic fabric, the 70-year-old bombastic tycoon pledged to deport illegal immigrants, ban Muslims from the country and tear up free trade deals.

Sharifs' Dubai factory was never sold, it was liquidated: Kaira