Ready for talks with India maintaining respect and dignity: Nisar 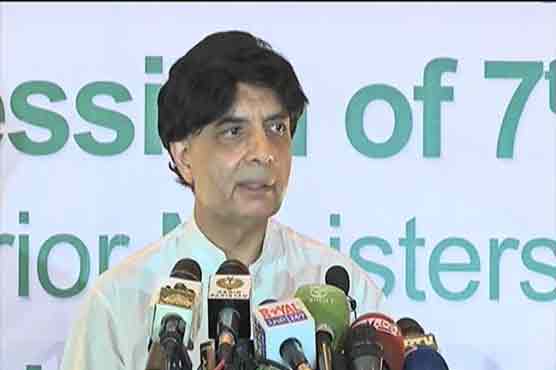 No country under the guise of words should criticise Pakistan, giving a sensitive statement: Nisar

ISLAMABAD (Dunya News) – Interior Minister Chaudhry Nisar spoke to media on Thursday and said that Pakistan was always ready for dialogue but volley of accusations were not the solution to the problem and that so did Pakistan if India had reservations on several issues, reported Dunya News.

He said that Pakistan was ready for peaceful dialogue and better relations with India but only remaining within the limitations of respect and dignity. Talking about South Asian Association for Regional Cooperation (SAARC), Nisar briefed media and said that the conference was held in a peaceful and better environment. All the countries focused on the concerned agendas, he added.

He also cleared that the agenda was sound and totally normal to other countries as well, but no one knew what happened to Indian Interior Minister Rajnath Singh. He also said that other than India, one more country was found indulged in political point scoring. He agreed to the fact that Rajnath did not mention Pakistan in his speech, but whatever he had been saying was directly or indirectly related to Pakistan, he added.

It was against the rules and regulations of the conference if Nisar had mentioned India by name, but he just replied to a statement which was somehow linked to Pakistan and giving a statement in that specific matter was mandatory on the state level, Nisar said.

Categorically standing by his stance, Nisar said that no country under the guise of words should criticise Pakistan, giving a sensitive yet disturbing statement out of it. Pakistan had been the biggest victim of terrorism and also had many particulars against terrorism as a state.

He said that APS School Peshawar and Gulshan-e-Iqbal Park Lahore were attacked and should be condemned on an equal level. The global community needed to ask Pakistan about international intervention and anti-state activities on Pakistani soil and particulars of the countries involved in it, he added.

He said those Kashmiris fighting for independence and rights of self-determination were labeled as separatists and terrorists by India. No country should oppress self-righteous movements in the name of terrorism.