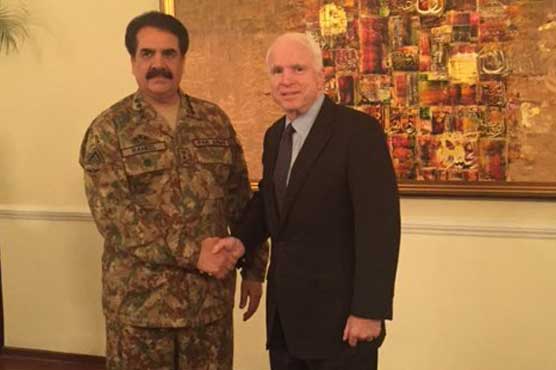 ISLAMABAD (AFP) - US senator John McCain expressed support for Pakistan’s efforts in the fight against Tehreek-e-Taliban after visiting a key tribal district recently retaken by the military, the Pakistani foreign ministry said Sunday.

A four-member, bipartisan US Senate delegation led by the former presidential candidate went to North Waziristan, where in 2014, under US pressure, the army launched an operation to wipe out militant bases and end the near decade-long insurgency.

In May, the army announced it had successfully cleared the area of militants.

The foreign ministry statement said that the US delegation had met with Pakistani Foreign Affairs advisor Sartaj Aziz and held talks on Pakistan-US ties as well as the situation in Afghanistan.

Aziz "appreciated Senator McCain for his positive comments regarding the importance of Pakistan-US relations at a time when the region was facing complex challenges," the statement said.

The relationship between the two nations has been strained at times with some in Washington believing Pakistan has not done enough to bring its influence to bear and to persuade the Taliban to renounce violence.

Pakistan was angered over a recent US drone strike which killed the Taliban’s leader Mullah Akthar Mansour in May in southwestern Balochistan province.

The US Congress also blocked the subsidised sale of eight F-16 jet fighters to Pakistan in May accusing of it of being lax in the fight against militants.

The US has carried out hundreds of drone strikes in Pakistan, mainly in the border tribal regions with Afghanistan, and leaked documents show Islamabad had quietly consented despite publicly protesting.

Drone attacks have proven extremely controversial with the Pakistani public and rights groups.