Peace and stability not possible until eradication of corruption: General Raheel 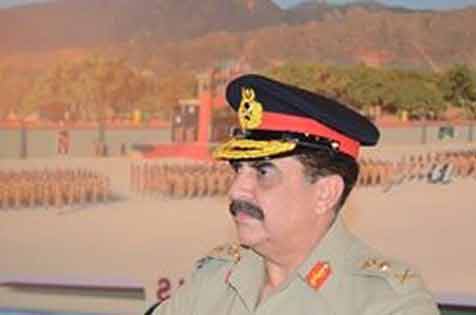 COAS says accountability at all levels necessary to wipe out corruption

RAWALPINDI (Dunya News) – Chief of Army Staff (COAS) General Raheel Sharif on Tuesday stated that accountability at all levels is necessary in order to wipe out corruption from the country, adding that peace and stability are not possible without curbing corruption, reported Dunya News.

According to the Inter-Services Public Relations (ISPR) department, Army Chief General Raheel Sharif paid visit to the Signals Regiment Center in Kohat on Tuesday. He badged Major General Sohail Ahmad Zaidi as a Colonel Commander. While addressing a ceremony at the event, General Raheel said that the army has the support of the entire nation in the war against terrorism, adding that both the civil and the military leadership of the country is working together to curb terrorism.

He further stated that the terrorists’ hideouts are being destroyed and the war against terrorism is being carried out with the support of the people. He said that accountability at all levels is crucial for the country as peace and stability cannot be ensured without curtailing them.
COAS said that Pakistan army will endorse all moves made for the betterment of the nation.

General Raheel paid visit to South Waziristan yesterday where he was briefed in regards to the final stages of the ongoing Operation Zarb-e-Azb. He announced to initiate a wide scale search operation in the region against the terrorists and also directed the forces to maintain hold over the achievements made in the area.