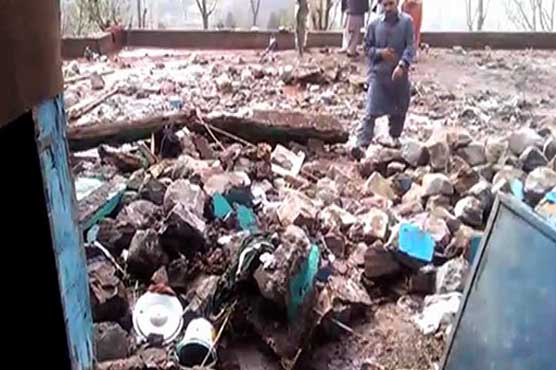 The death toll from torrential rain that has lashed Pakistan for the past few days has risen to 90.

CHARSADDA (Dunya News) – At least four people were killed while six others sustained injuries as roof of a house collapsed in border area of Mardan and Charsadda, reported on Monday.

According to details, the roof caved in due to heavy rainfall in Bako area of Parhoti as the house was dilapidated. The mishap took lives of as many as two children, Yaseen and Talha, a 50-year-old man named Lal Faroosh and a woman and left six injured.

Rescue teams reached the spot and shifted the injured to the District Headquarters Hospital for medical assistance.

The death toll from torrential rain that has lashed Pakistan for the past few days has risen to 90, authorities said, with collapsed roofs blamed for the fatalities.

Poorly-built homes, particularly in rural areas, are most susceptible to collapse during heavy spring rains.

Apart from the deaths, several were reported injured while various houses were damaged, said a statement by the National Disaster Management Authority.

The rain began late Thursday across the country, with the southwestern province of Balochistan and northwestern Khyber Pakhtunkhwa worst hit.

The heavy showers also triggered landslides in various areas of Azad Kashmir which left several homes destroyed. Communication system also went down due to the rain.

Earlier, Pakistani rescuers found the bodies of two schoolchildren hit by an avalanche in the mountainous northwest, while nine more remain buried beneath the snow.

The disaster struck on Saturday afternoon near the village of Susom, some 40 kilometres (24 miles) north of the town of Chitral in Khyber Pakhtunkhwa province, local police station chief Sultan Baig told AFP.

Severe weather hits the country every year, with hundreds killed and huge tracts of prime farmland destroyed in recent years.