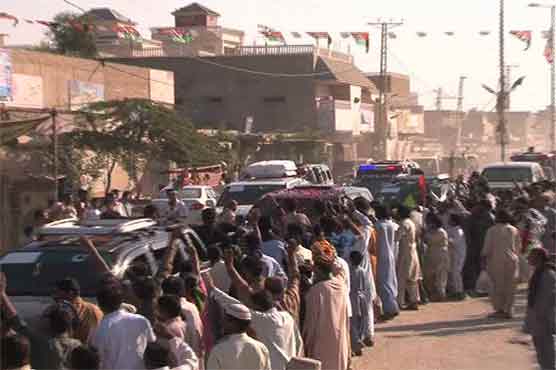 Bilawal arrived at Mohenjo-daro airport along with Bakhtawar, accompanied by workers to home

LARKANA: (Dunya News) – Co-chairman Pakistan People’s Party (PPP) Bilawal Bhutto Zardari on Friday was given warm welcome everywhere from Mohenjo-daro to Naudero just one day before the election. Bilawal arrived at Mohenjo-daro Airport along with his sister Bakhtawar Bhutto Zardari and was accompanied by thousands of workers, protocol cars, police mobiles and official cars to home in Naudero, reported Dunya News.

PPP workers gave warm welcome to Bilawal and Bakhtawar at various places in Larkana. Bilawal was accompanied by 15 police cars and over 15 official cars as a protocol.

Police officials deputed on Bilawal’s security remained on their toes throughout the visit. They continued to run ahead of Bilawal’s car out of Larkana from where the PPP leaders left for Naudero. Bilawal will cast his vote in Ward No. 4 tomorrow in Naudero.