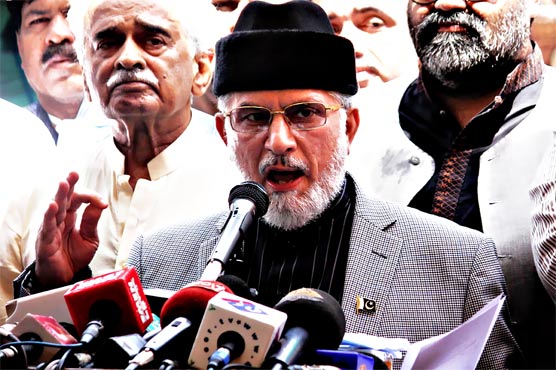 Chief PAT vows to surrender the day PM and CM Punjab get apprehended.

We shall not agree to any JIT that comprises of Punjab police officers whereas Chief Minister Punjab Shahbaz Sharif must also step down before JIT is devised, he added.

He stated none of PAT members would be a part of JIT.

Qadri said CM Shahbaz himself constituted a tribunal comprising of Lahore High Court (LHC) judges and later when the tribunal presented the report, Shahbaz Sharif took stay order from LHC and the report has not been brought to light till date because Punjab government and CM Punjab was held responsible.

Some people are send abroad as the government fears they would testify against them as approvers, he revealed.

He further revealed that CM Punjab and Prime Minister Nawaz Sharif pressed upon to appoint Tauqeer Shah as ambassador to Geneva.

Referring to his arrest warrant he said he would not present himself before the court; those who have issued the warrants must come and arrest him.

He vowed to surrender the day PM and CM Punjab get apprehended.

He further affirmed not to step down from the case of Model Town tragedy adding that the ones alleging him of any deal must now feel abased.

Tahirul Qadri announced to hold a rally in Bhakkar on November 23 and sit-in the very next day whereas PAT would conduct a massive rally in Karachi on December 25.

Earlier today, Tahirul Qadri on Thursday paid a visit to Data Darbar, the shrine of sufi saint Abul Hassan Ali Hajvery, hours after his flight landed in Lahore from London.

The PAT chief’s convoy took nearly five hours to reach Data Darbar from the airport where he was warmly welcomed by hundreds of his followers.

The PAT workers have pouring in from all across the city to welcome their leader, holding his portraits, party flags and banners, on the road from airport to the shrine in the heart of Lahore city.

Throughout the travel, Dr. Qadri’s motorcade was showered with rose petals by his supporters, a good number of women among them.