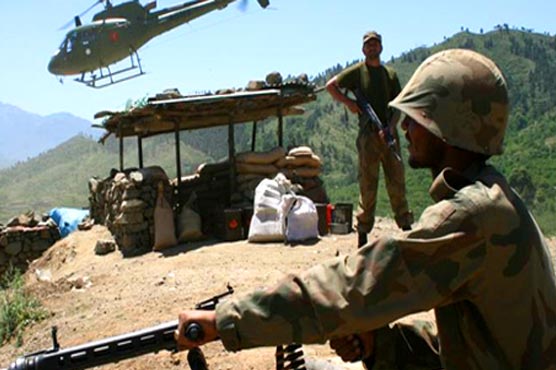 Pak Army says it has killed more than a thousand militants during operation Zarb-e-Azb.

A statement said troops repulsed the early morning attack at the Dandi Kuch post in the Spinwam area of the district.

"11 terrorists were killed and one apprehended. The dead bodies of three terrorists are with security forces," it said, adding three paramilitary troops were also killed.

Pakistan and Afghanistan share a volatile and porous border that is often the scene of cross-border attacks. Militants from both countries also cross to use the neighboring country s soil as a safe haven.

Pak Army says it has killed more than a thousand militants and lost 86 soldiers since the start of the operation, though the numbers cannot be independently verified as journalists do not have regular access to the combat zone.

Since June 15, airstrikes, artillery, mortars and ground troops have all been used to retake territory in North Waziristan tribal region, which had become a haven for fighters with the Tehreek-e-Taliban Pakistan (TTP) and other militant outfits.

The military has said the major towns of Miranshah and Mir Ali had now been cleared of insurgents, along with a 90-kilometre (55-mile) road through North Waziristan.