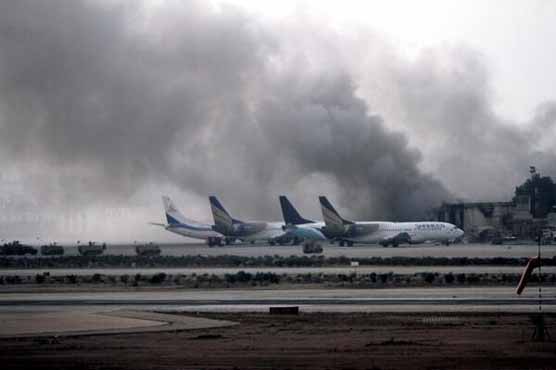 KARACHI (Dunya News/AFP) - Security forces on Monday relaunched search operation near white-body hanger at Karachi airport after fresh firing was heard from inside.

According to Dunya News, heavily armed militants had launched an assault on Jinnah International Airport, leaving at least 18 people including security personnel and five airport workers dead in a six-hour siege that the army quelled at dawn on Monday.

Explosions and gunfire rang out as the attackers, equipped with suicide vests, grenades and rocket launchers, battled security forces in one of the most brazen attacks in years in Pakistan s biggest city.

Authorities said all 10 militants had been killed.

"Update: Area cleared. No damage to aircraft, fire visible in pics was not plane but a building, now extinguished. All vital assets intact," military spokesman Major General Asim Bajwa said in a tweet.

The attack will raise fresh concerns about Pakistan s shaky security situation, and questions about how militants were able to penetrate Jinnah International Airport, which serves one of the world s biggest cities.

According to Dunya News, banned Tehreek-e-Taliban Pakistan (TTP) has claimed responsibility of the attack. The attack came as talks between Pakistan and the Taliban, which began earlier this year, hit an impasse.

Officials said the gunmen entered from two sides of the airport at around 11:00 pm on Sunday -- the terminal used for the hajj pilgrimage, and an engineering section close to an old terminal that is no longer in use.

Militants, some dressed in army uniform, clashed with the airport s security force who were backed by police, paramilitary squads and elite commandos.

Smoke was seen billowing from the airport as fires raged close to planes parked on the runway.

A senior intelligence official said it appeared the militants had aimed to hijack a plane that passengers were boarding at the main terminal, but that when they were repelled they went on the rampage.

"The passenger plane at Jinnah terminal was their target and when they failed to reach there they destroyed two private terminals in frustration," he told AFP.

After the attack was quelled, a bomb disposal expert in full protective gear was seen walking from the site carrying a suicide vest and a bag full of hand grenades.

"Seven terrorists were killed by the security forces while three blew themselves up," Rizwan Akhter, director-general of the paramilitary Rangers, told reporters.

I saw the terrorists firing

Broken glass and spent gun magazines littered the engineering section where the first exchange of gunfire took place as smoke from grenade attacks began to die down.

"I heard fierce firing and then saw the terrorists firing at security forces... Thank God I am alive, this is very scary," said eyewitness Sarmad Hussain, an employee of national carrier Pakistan International Airlines (PIA).

Syed Saim Rizvi, who was on board a plane on the runway, tweeted: "Huge blast!!!! I do not know whats going on outside -- heavy firing started again - full panic on board!"

The city s Jinnah Hospital said that 14 dead bodies had been brought there, including eight airport security personnel, a ranger, a civil aviation official and four PIA staff.

The assault forced the closure of the airport, but the military said it would be ready to resume services later in the day.
The latest trouble came with tensions already high over the arrest in Britain of the exiled leader of Pakistan s MQM party, which dominates politics in Karachi -- Pakistan s economic centre and main port.

However, similar raids in the past have been claimed by Taliban militants who rose up against the Pakistani state in 2007 in an insurgency that has claimed thousands of lives.

In 2011, Taliban gunmen attacked the Mehran naval base, which lies close to the airport, destroying two US-made Orion aircraft and killing 10 personnel in a 17-hour siege.

The group also carried out a raid on Pakistan s military headquarters in the garrison city of Rawalpindi in 2009, leaving 23 dead including 11 troops and three hostages.

The airport assault will cast attention on the government s controversial decision to negotiate with the Taliban instead of using greater force to deal with them.