WARSAW (AP) — As 83-year-old Hanna Zientara endured subfreezing temperatures to get a COVID-19 vaccine booster shot in Warsaw, her 30-year-old grandson was starting a Canary Islands vacation while unvaccinated and stubbornly refusing his grandmother’s repeated pleas to protect himself.

Poland and several other countries in Central and Eastern Europe are battling their latest surges of coronavirus cases and deaths while continuing to record much lower vaccinations rates than in Western Europe.

In Russia, more than 1,200 people with COVID-19 died every day for most of November and on several days in December, and the daily death toll remains over 1,100. Ukraine, which is recording hundreds of virus deaths a day, is emerging from its deadliest period of the pandemic.

Meanwhile, the mortality rate is Poland, while lower than it was than in the spring, recently has caused more than 500 deaths per day and still has not peaked. On Wednesday, the country reported 592 more virus deaths, the highest number of its current wave.

Intensive care units are full, and doctors report that more and more children require hospitalization, including some who went through COVID-19 without symptoms but then suffered strokes.

The situation has created a dilemma for Poland’s government, which has urged citizens to get vaccinated but clearly worries about alienating voters who oppose vaccine mandates or any restrictions on economic life.

Polish Prime Minister Mateusz Morawiecki received his vaccine booster publicly last week and urged others to get their shots to protect older adults at Christmas. He noted that some family gatherings during the pandemic have “ended tragically, ended with the departure of our grandfathers, grandmothers.”

To promote vaccines, Health Minister Adam Niedzielski pointed out Monday that of the 1,085 people under age 44 who died with COVID-19 so far this year in Poland, only 3% were fully vaccinated. “This black statistic could be different thanks to vaccinations,” he said.

With a health system already stretched to its limits, Poland’s government announced Tuesday that it is requiring doctors, other medical personnel, teachers and uniformed workers like police officers, members of the military and firefighters to be vaccinated by March 1.

Critics of the right-wing government denounced the step as too little too late, while a far-right party, Confederation, slammed it as discriminating against unvaccinated Poles.

The resistance to vaccines in Eastern Europe is rooted in distrust of pharmaceutical companies and government authorities, while disinformation also appears to be playing a role.

As worried grandmother Zientara received a Pfizer vaccine booster dose on Tuesday, the Polish government reported 504 more deaths, bringing the pandemic death toll to over 86,000 in the nation of 38 million.

Sitting nearby was Andrzej Wiazecki, a 56-year-old who needed no convincing to come in for a booster shot. He said he has several friends hospitalized with COVID-19, including a previously healthy and athletic 32-year-old who is fighting for his life.

“I expect him to die, especially since there is no room for him in the intensive care unit because there are so many patients that he is lying somewhere in a corridor,” he said.

With 54% of Poles fully vaccinated, the country has a higher coronavirus inoculation rate than some nearby countries. Ukraine’s vaccination rate is 27%, and in Russia, where domestically developed vaccines like Sputnik V are on offer, it is about 41%. Bulgaria, which like Poland belongs to the European Union, has a vaccination rate of 26%, the lowest in the bloc.

The discovery of the omicron variant last month has fueled fears in Poland, where experts believe the variant is likely already circulating though no cases have been confirmed. Many critical questions about omicron remain unanswered, including whether the virus causes milder or more severe illness and how much it might evade immunity from past COVID-19 illness or vaccines.

According to Polish media reports, the variant’s emergence led some holdouts to finally get their first vaccine shots, including in the southern mountain region of Podhale, where the vaccination rates are far below the national average.

But at the vaccination center in Warsaw, located in a blood donation center, there were not many first-timers. Coordinator Paula Rekawek said only one person had turned up in the center’s first three hours of operation Tuesday to request an initial dose.

Warsaw restauranteur Artur Jarczynski has found a business opportunity in the high level of vaccine resistance. His popular Der Elefant was the first restaurant in Poland, and until recently the only one, to require customers to show proof of vaccination to enter.

Jarczynski said that while traveling in Western Europe, he was asked for proof of vaccination to dine and thought it was a good practice. When he first introduced the requirement at Der Elefant, anti-vaxxers demonstrating in front of parliament brought their protest to his restaurant and he got police protection. Jarczynski says he also was bombarded by hateful phone calls for a couple of days.

Yet many patrons appreciate the rare public space where they can feel safe while enjoying a meal, such as the mussel soup, steaks and other fare served for lunch on Tuesday. One diner, Ryszard Kowalski, said he liked knowing everyone around him was vaccinated but the restaurant’s policy was proof “there is no need for government orders” to create safe environments.

But Jarczynski has not yet dared to impose the vaccine requirement in several other Warsaw restaurants he owns.

He described Der Elefant as “an island in a country of almost 40 million people, which on the one hand makes us happy, but also sad that we are just such a tiny island.” 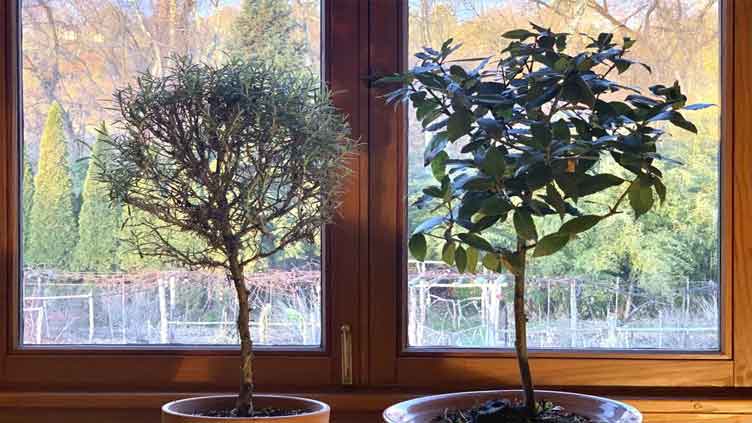 Most herbs don't thrive on winter windowsills. Two do.