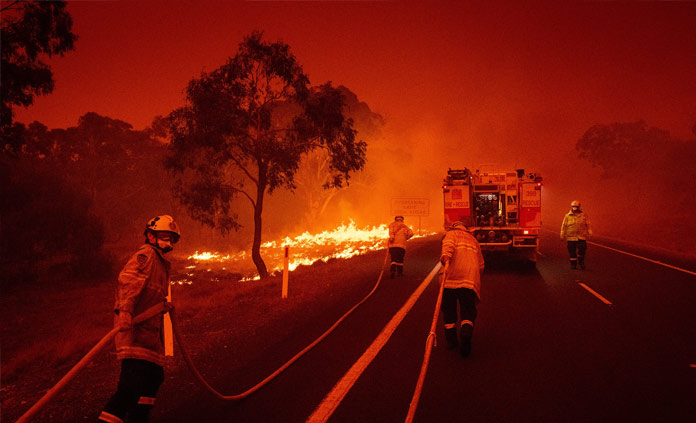 The original photo of the three firefighters can be traced back to February 2019.

TASMANIA (Reuters) - Social media users have been sharing a photo of three firefighters covered in soot, wrongly saying it shows Ukrainian emergency crews battling blazes caused by Russian attacks. Online searches show the image dates back to 2019 and the men are Australian firefighters, caught up in an outbreak of bushfires in Tasmania.

Examples of recent postings can be seen here and here, including one now-deleted tweet from Iuliia Mendel, the former press secretary to Ukrainian President Volodymyr Zelenskiy (here).

One caption on a Facebook page reads: “Ukrainian Firefighters save lives by risking their lives! Heroes about whom little is said,”

The original photo of the three firefighters can be traced back to February 2019, when it was shared widely on social media and published in news reports about bushfires in Tasmania (here).

News reports at the time said it was taken by firefighter John Lyons and showed his colleagues, Jason Luck, John Kroczewski, Paul Catteral. Reuters has not independently verified this information, which is outside the scope of this check (here and here).

VERDICT
Miscaptioned. The photo dates back to at least February 2019 and has nothing to do with Russia’s invasion of Ukraine.