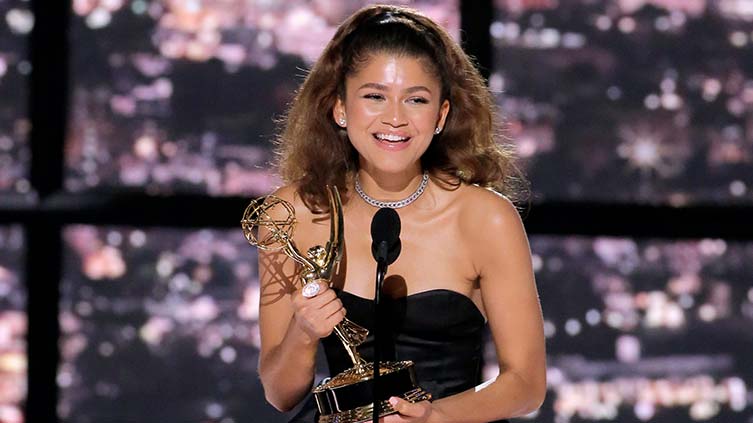 LOS ANGELES (Web Desk) - Zendaya has once again triumphed at the Emmys and once again made history as the "Euphoria" star won the Emmy for Outstanding Lead Actress in a Drama Series, a prize she also received in 2020. In doing so, she becomes the first Black actor to win the lead drama actress Emmy more than once.

"My greatest wish for Euphoria was that it could help heal people, and I just want to say thank you for everyone who has shared their story with me," Zendaya said.

Zendaya is one of only two Black actresses to ever win the Outstanding Lead Actress in a Drama Series Emmy. The first was Viola Davis, who made history when she won for "How to Get Away with Murder" in 2015. Davis, however, never won a second time, and no Black woman other than Zendaya has won since.

Zendaya’s first Emmy win for "Euphoria" in 2020 was already historic for another reason, as at age 24, she became the youngest person to win the lead drama actress Emmy. The actress plays Rue, a teenager dealing with substance abuse issues, on the wildly popular HBO series. Her win in 2020 was considered an upset, but she was a favorite going into Monday’s ceremony.

Zendaya is also nominated for an Emmy as an executive producer of "Euphoria", which is up for Outstanding Drama Series, and she was nominated for Outstanding Original Music and Lyrics for the show, as well. Unlike MJ Watson, when it comes to the Emmys, there’s no need for Zendaya to expect disappointment.