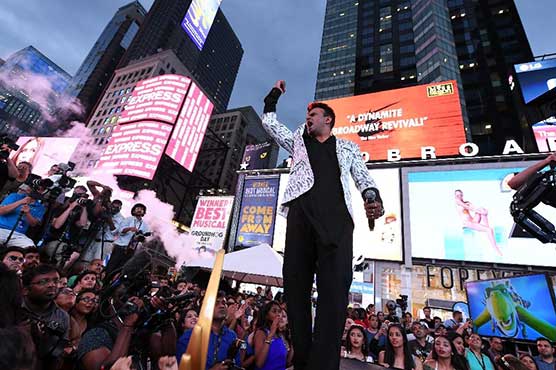 NEW YORK (AFP) - The International Indian Film Academy fired the opening salvo in a weekend of glitz, glamor and music for its annual awards, sending fans wild with excitement by hosting Bollywood stars in Times Square.

Hundreds of people -- overwhelmingly South Asians joined by bemused onlookers, confused tourists and a smattering of Western converts to Bollywood -- cheered a fashion show and shrieked in delight when actors Shahid Kapoor blew kisses and Varun Dhawan performed on stage.

The crowd turned into a sea of camera phones and raised arms, a taste of the excitement building among Indian cinema fans in New York, the heart of a tri-state area home to around 1.8 million Indian-Americans.

"It’s so nice, I feel so proud," beamed Neelam Singh, a 47-year-old software consultant and mother of one.

"It looks like a mini India," she said of the so-called IIFA "Stomp" party in Times Square.

Living in the United States for more than 20 years, she and her girlfriends have been planning what to wear for weeks, some jetting in from as far as Atlanta and Panama in the hopes of seeing their idols.

Events kick off in earnest Friday with a concert honoring A.R. Rahman, the movie composer who won two Oscars in 2009 for best original score and best original song for "Slumdog Millionaire."

That bonanza -- together with the awards ceremony on Saturday -- will be held at the 82,500-seat MetLife Stadium, an outdoor NFL venue across the Hudson River in East Rutherford, New Jersey.

"We need you to pray a little for the rain Gods to be on our side," joked Kapoor on Thursday with downpours forecast.

The 18th edition of the awards, which some dub the Oscars of Bollywood, comes at a time of growth for Indian film in North America.

The organizers have been on a publicity blitz, ringing in the Nasdaq stock exchange bell Wednesday, drumming up sponsorship and marketing.

Mohammad Asif, founder of the Bombay Theatre in Queens, said that since he set up shop in the mid-1990s, the number of cinemas showing Indian films in the United States has grown from around 15-20 to 200.

He attributed the increase to the thriving Indian economy, bigger film budgets, an increase in the South Asian diaspora, and growing popularity among Afghans, Arabs, Russians and Caribbean immigrants.

Increased cross-over with Indian stars such as Priyanka Chopra having roles in Hollywood is giving India more visibility and global exposure.

"This is really India’s soft power at its best, as we strive to develop our relationship with the United States further," consul general to New York, Riva Ganguly Das, told an IIFA press conference.

But if IIFA’s hopes to reach out to new audiences by holding its awards ceremony each year overseas, it still has some way to go.

"It’s a store," one American in Times Square said blankly when asked if he knew what Bollywood was. A passing British tourist said he had never heard of IIFA, nor star actors Salman Khan and Katrina Kaif.

"I’ll probably move on," he said walking off.

Neither are drawn-out logistics and fluid timings to every taste in a city well versed in tight schedules.

But Foram Dalal, 30, who studies management and information systems, travelled in from New Jersey with her parents, seven-month-old daughter, husband and friends determined to savor the moment.

"Even if you see one star, it’s worth it," she told AFP in Times Square. "I’m more than overwhelmed to be at this place right now."

With a viewership of almost 800 million, IIFA is India’s biggest media event and one of the world’s most-watched annual entertainment shows.

"I’ve seen people who don’t even understand Hindi -- they watch it, because they dub it as well, and they’re famous. That’s why they’re here," she said gesturing to Times Square.