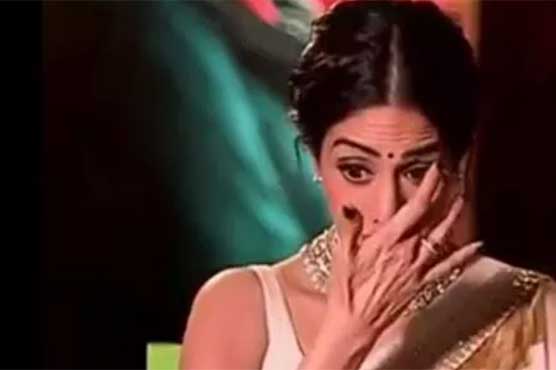 Sridevi also called Sajal as her child and prayed for her successful career.

LAHORE (Daily Dunya) – Indian glamorous actress Sridevi broke into tears while recording a message for Pakistani artists Adnan Siddiqui and Sajal Ali who performed as her husband and step daughter in ‘Mom’, respectively.

The actress sent love and wishes to the Pakistani stars and said that she misses them and that it’s an emotional moment for her to record this video.

She also appreciated the work of Adnan and Sajal and said that the film would have been incomplete without them.

Sridevi also called Sajal as her child and prayed for her successful career.

‘Mom’ directed by Ravi Udyawar and lent music by A R Rehman is a thriller likes of which have been successful on the silverscreen in the past.