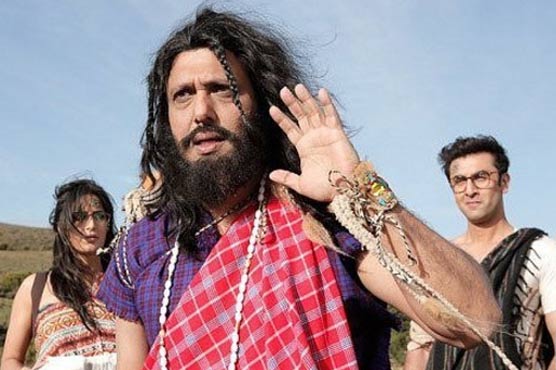 (Web Desk) – Indian actor Govinda is expected to play a cameo role in Anurag Basu movie Jagga Jasoos which will release on July 14. He will appear as a surprise element for the fans.

The movie is starred by Ranbir Kapoor and Katrina Kaif. Govinda’s picture was shared by a fan account of Katrina Kaif on social media after which it caught the eye of people all over the internet and astonished them. The 54-year-old comedian is known to play different versatile roles in the past but his fans would have never imagined him in this avatar.

He can be seen wearing a wig and long beard. The clothing also looks tribal which infers that he is playing the role of a villager. In background, both Katrina and Ranbir are looking at him and it looks like a still from the sets.

Jagga Jasoos is a comedy drama based on the story of a detective. Adah Sharma also plays an important role in the movie. Ranbir, who plays as the lead role, is in search of his missing father.

The movie songs have been appreciated by the masses and received praise from fans. Check out "Jhumritalaiyya":