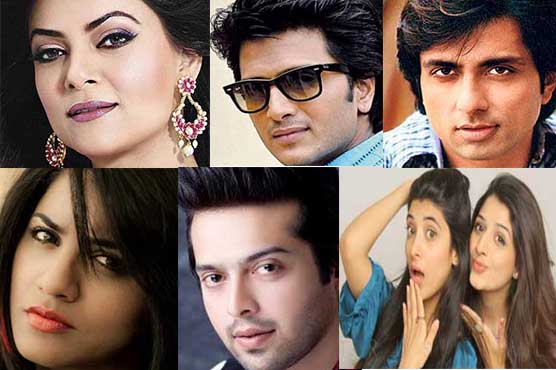 A bulk of tweets posted by prominent personalities after the Champions Trophy final.

(Web Desk) - After the much-hyped and excited final of Championships Trophy 2017 that was amazingly won by Pakistan against India by 180 runs, everyone from across the world took to the social-networking website Twitter, making #CT17 top trend on it.

A bulk of tweets posted by prominent personalities, including cricketers, politicians, television anchors, and showbiz personalities flooded the Twitter.

Here are some of the tweets posted by Indian and Pakistani celebs, appreciating or encouraging their respective team over their performance in the series.

The most graceful tweet was posted by the winner of Miss Universe pageant of 1994, Sushmita Sen.

Congratulations Pakistan!!!! you brought your best game to the Finals!!All rounded brilliance no doubt!!! A blessed Ramadan indeed!!

This is how Bajirao Mastani actor, Ranveer Kapoor satisfied himself after India’s defeat.

In sports there is always a winner and loser. Today pakistan was the better team well played. I am sure india will come back much stronger.

Congratulations Team Pakistan. Undoubtedly, the better side today in all departments.

Congratulations to the Pakistan team on winning the Champions Trophy. The better team on the day. Chin up team India, we still #BleedBlue

This is not it, the wishes, appreciations and congratulations from Pakistani actors, singers, and other personalities belonging to showbiz also took the social media by storm. Here is how Pakistani celebs responded to the victory.

Thank you @SarfarazA_54 and team green for bringing us pride and joy.
We got your back. #PAKvIND

Whose your daddy now???

What a spectacular match!!!! Only a Pakistan-India Match can create this type of hysteria across the globe!!! #ChampionsTrophy2017

The Green Game could not have been better than this. You created history. Out of words. Just GLORIOUS!!! #ChampionsTrophy2017 #PakVInd

Pakistan hailed by media after 'confounding everyone'

'And this is Our Baluchistan', tweets DG ISPR after Pakistan victory

Fakhar Zaman to get one kanal plot in Bahria Town