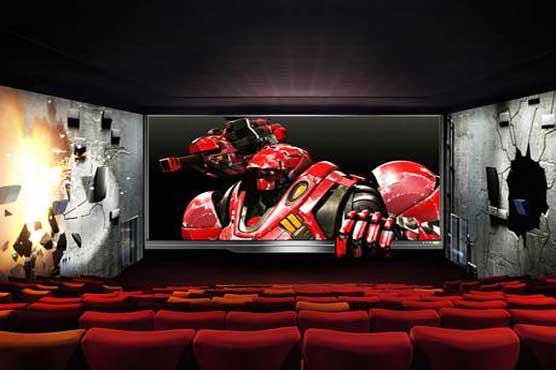 BUSAN (AFP) - A new format that gives movie-goers a panoramic 270 degree view will be rolled out by South Korea s biggest cinema chain this month, using the walls of theatres as additional screens.

Screen X, developed by cinema chain CJ CGV, was on show at the Busan International Film Festival last week in the premiere of a 30-minute spy thriller "The X", directed by Kim Jee-Woon, a film commissioned to showcase the expanded three-screen format.

He likened it to a "horizontal" version of IMAX, a format that offers greater size and resolution than conventional film.

Screen X requires filmmakers to use three cameras to shoot the same scene simultaneously from different angles to create the wider "surround" effect.

"The space in front of you is filled up completely," said Kim. "It provides a new depth for viewers."

"The X" showed off the capabilities of the format in a chase sequence and a dream sequence that seemed to envelop the cinema.

Audiences at Busan watching "The X" seemed at first confused whether to look left, right or straight ahead before settling in to the experience.

"It was really fun. I personally don t like 3D or 4D films but this made me feel like I was inside the film," 19-year-old student Jung Gwang-Soo told AFP.

CJ CGV, which also has interests in China, Hong Kong and the United States, has been testing the technology on advertisements, but has remained tight-lipped on installation costs -- reportedly between $139,300 and $185,800 per screening room, according to Dow Jones Newswires.

Installation will not be without logistical challenges, given that the effect is lessened in seats positioned to the sides of the cinema.

By the end of October the system will be available in 31 cinemas around South Korea in readiness for a series of planned feature-length productions to be rolled out over the next 12 months.

Others focus on intimacy

While Kim said he was excited to be able to explore the possibilities of the new technology -- and freely admitted he was more concerned with effects than plot in his first production with it -- other directors showcased technology they believe allows the audience to focus more on the stories they are telling.

The Israeli-French production "Ana Arabia", which looks at life in a Jewish-Arabic community, was one of a number of new films screening in Busan that used advanced steady-cameras to enable directors to shoot in one single take.

In "Ana Arabia s" case, that was for 74 constant minutes while the Iranian film "Fish & Cat" managed to a single take of 134 minutes.

"Ana Arabia s" veteran director Amos Gitai said the technology helped filmmakers engage with their audiences through providing a sense of intimacy not available when using multiple cameras and edits.

"This method is a way of concentrating the audience s focus," he said.

"Filmmakers are always looking for new ways to tell our stories and I am trying to find ways to encourage dialogue through my films."