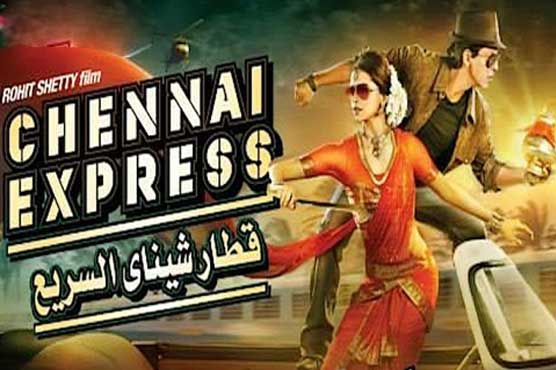 Men, women and college students applauded Khan's comic timings and laughed when he punched the bad guys, clearly showing that the film's Hindi language soundtrack is no barrier to Egyptians.

"I love Shah Rukh Khan. I am so happy that I saw his movie in Cairo," said a cheerful Mohammed Hamid who sells DVD films, as he emerged from Cairo's Galaxy multiplex after watching the movie for the second time in as many days.

"Chennai Express" has entered its second week in Egypt, screening in 10 cinema halls -- eight in Cairo and two in Alexandria -- after smashing box office records in India.

It is the first of a "pipeline" of Bollywood films to be screened with Arabic subtitles in Egypt, distributors say.

A typical Bollywood mix of action, romance and comedy, the film tells the story of a 40-year-old man who becomes embroiled in the dealings of a south Indian don when he rescues his runaway daughter from thugs aboard the Chennai Express train to southern India.

Khan himself is jubilant at the Egyptian response to his movie.

"A big thanx to everyone in Egypt... I am made to understand u guys made the film go thru the roof of the pyramids ...!!!" the actor wrote on his Twitter account.

DVD vendor Hamid, who has given himself the nickname Kabir Khan after a character played by the actor in his 2007 blockbuster "Chak De India!" (Come on India!), showed up to the film screening in a headband similar to one worn by Khan at a cricket match.

He says he wants more Bollywood movies to be screened in Egypt.

"Shah Rukh is the best, but we want to see movies of Amitabh Bachchan also," said Hamid, referring to India's legendary actor.

Bachchan is a household name in Egypt, with fans ranging from taxi drivers to bankers fondly remembering his movies from the 70s and 80s when they dominated Egyptian theatres.

His megahit "Mard" (Macho) was a huge success in the 80s in Egypt, ruling cinema halls for months.

The restriction was "one of the reasons" for the demise of Bollywood's influence in Egypt, says Antoine Zeind, chairman of United Motion Pictures, the distributors of "Chennai Express" in Egypt.

"At that time there were no multiplexes and Egypt also produced a large number of films," said Zeind, detailing other causes of the fall-off in public screenings of Indian films.

For Bollywood insider Amrita Pandey of Disney UTV, the scourge of piracy and accessibility to Indian cinema through satellite and cable television contributed to Egyptians "retreating to watch movies at home instead of at theatres".

"Needless to say the political instability of the region added to the challenge," Pandey told AFP in Mumbai.

Cairo's deadly violence and a night-time curfew imposed since August after a bloody security crackdown on supporters of ousted president Mohamed Morsi is no deterrence to Zeind.

He plans to bring two other big budget Bollywood films "Kriish 3", the latest in the hit superhero franchise, and action-thriller "Dhoom 3" as soon as they are released in India.

In the meantime he will continue screening "Chennai Express", which theatre managers say is attracting audiences through word of mouth.

"Egyptians have always loved Bollywood movies," Zeind told AFP at his downtown Cairo office, its walls plastered with posters of Hollywood flicks like "The Wolverine" and "300: Rise of an Empire".

"We had to start somewhere and it was a good time to bring Bollywood films back to Egypt as Indian cinema celebrates its 100th year."

Over the past few months Indian and Egyptian officials have worked on reviving the film distribution network between the two countries.

"It was an odd situation ... Egyptians clearly love Indian films ... and yet, they couldn't find their favourite Indian films on the big screen. That's where we intervened to connect Egyptian distribution channels with Indian film producers," said Navdeep Suri, Indian ambassador in Egypt.

"We were downloading new Bollywood movies from the Internet, but now we can see them on our big screens. We are thirsty for Bollywood," she said.