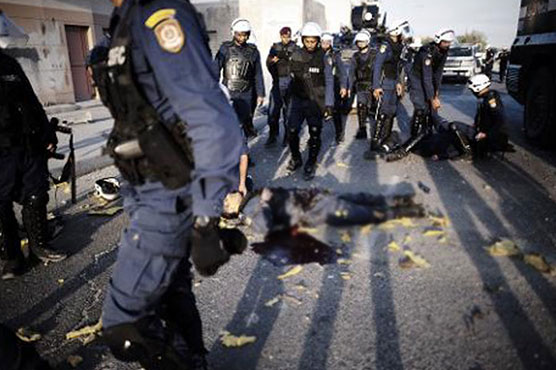 Police photos showed one child's fingers mangled by the blast and bodies peppered with shrapnel.

DUBAI (AFP) - Two children, aged 10 and 11, were wounded while planting a roadside bomb in a Shiite village in Bahrain where a blast killed three policemen this week, police said Thursday.

"A group of terrorists exploited these children by asking them to plant a home-made bomb" in Daih, state news agency BNA quoted a police official as saying.

He said one child was "seriously" wounded when the device exploded.

Police photos showed one child s fingers mangled by the blast and both boys  faces and bodies peppered with shrapnel.

Police said they have launched an investigation aimed at identifying those who incited the pair to plant the device.

Monday s explosion in Daih that killed three policemen was the bloodiest attack on security forces since the Shiite majority backed an uprising in February 2011 against the ruling Al-Khalifa family.

An officer from the United Arab Emirates was among the dead, making him the first officer from another Gulf state to be killed since forces from the region entered Bahrain in March 2011 to boost security personnel who later quelled the month-long uprising.

Public Security Chief Major General Tariq al-Hassan said in a statement that four more suspects in the "terrorist blast" have been detained, raising to 29 the number of arrests linked to Monday s attack.

The International Federation for Human Rights says at least 89 people have been killed in Bahrain since February 2011.