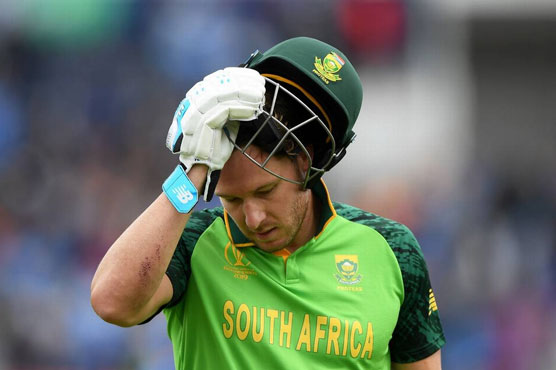 KARACHI (Online) - South Africa’s middle-order batsman David Miller has termed Pakistan’s Wahab Riaz as one of the fastest bowlers he has ever played.

Talking to a group of Pakistani journalists from Abu Dhabi in an online media conference, Miller said that he aims to make an impact for his team during his short stint with Peshawar Zalmi in the remainders of PSL6.

“I ve had that question about who s the fastest bowler I ve ever faced, and Wahab Riaz is definitely one. I ve played against him a lot of times in my career. And he s always a competitor and I m looking forward to playing under him this next couple of games,” the South African cricketer said.

“He wants to win. And yeah, he demands guys to be up for the challenge and putting in the hard work at training. So, I m looking forward to being a part of it. I think he s got a lot of good things, a lot of good qualities as a leader,” the 31-year-old cricketer said about the Peshawar Zalmi captain and Pakistani fast-bowler, Wahab Riaz.

The veteran of 134 ODIs and 81 T201 said that it is nice to be back for Pakistan Super League and he’s looking forward to some action-packed matches before he flies back to South Africa for a domestic tournament.

“I m not here for too long, just for a couple of games and just trying to make a big impact towards the team in whatever space I can for the short amount of time. I always wanted to play in this competition,” he said.

He further said that spinners will have a greater role during the remainders of the Pakistan Super League matches in the United Arab Emirates.

Replying to a question, the South African batsman said that Pakistan has produced some really good bowlers, specifically fast bowlers.

“The experiences that I ve had with the Pakistan bowlers so far is that there s this huge depth, they re always producing bowlers, world-class bowlers, so it definitely does rank up. This is one of the best countries with a bowling repertoire. And, the choices are endless, it s really healthy cricket environment at the moment,” Miller said about Pakistani bowling talent.

David Miller agreed with his Protease colleague Faf du Plessis that the leagues have taken over but termed it good for competition and competitiveness.

“I think as a couple of the leagues have struggled to find the fixtures and venues because of International circuit as well. I think it would be healthy over the next couple of years to try and work out. If we can find a middle ground between the two,” he said.

“To be honest with you. I love traveling, I love meeting different people and playing different teams and that s the joys of playing professional cricket when you get to meet all the guys in the different leagues, or the different cultures, these kind of things you get to experience,” he said about playing in various leagues.