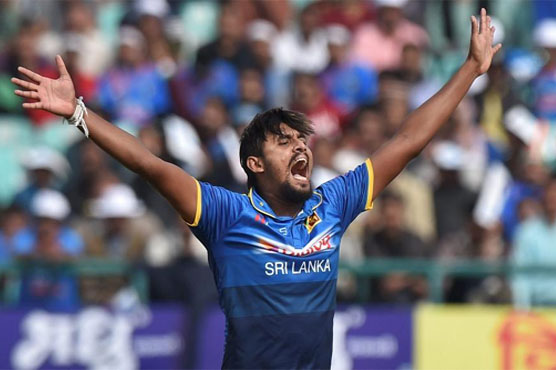 The hosts were sent packing in 38.2 overs after being put into bat.

The hosts were sent packing in 38.2 overs after being put into bat against an inspired Sri Lankan pace attack in the Himalayan town of Dharamsala.

Pace spearhead Lakmal wreaked havoc with career-best ODI figures of 4-13 before Mahendra Singh Dhoni hit a gritty 65 to lift India from a precarious 29-7.

Angelo Mathews -- who returned to bowl after recovering from a calf injury -- drew first blood, trapping Indian opener Shikhar Dhawan for nought in the second over of the innings.

Lakmal soon got skipper Rohit Sharma caught behind for two as the Indian top-order found it hard to counter the bounce and seam at the Himachal Pradesh Cricket Association Stadium.

New captain Thisara Perera, who replaced Upul Tharanga for the three-match ODI series, persisted with Lakmal from one end as the hosts’ top and middle order fell like a pack of cards.

With India in danger of being bowled out for an all-time low -- Zimbabwe’s 35 in 2004 versus Sri Lanka -- Dhoni put on a crucial 41-run partnership with Kuldeep Yadav for the eighth wicket as India got past 54, their lowest total against Sri Lanka.

Dhoni hit 10 fours and 2 sixes in his 87-ball stay, getting his 67th ODI half-century before he was finally dismissed by Perera to wrap up the Indian innings.